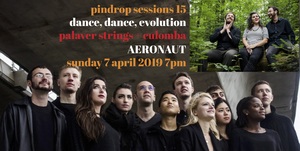 aeronaut brewery, in partnership with boston public broadcaster wgbh, is thrilled to invite you to the pindrop sessions. please join us in our taproom for this one-night-only event:

Palaver Strings is a musician-led string ensemble and nonprofit organization founded in 2014 by young musicians in the Boston area. Palaver has performed at the Kennedy Center, Bay Chamber Concerts, the Hammond Concert Series, a celebration of the Lullaby Project at Carnegie Hall, and has toured the East and West Coasts of the United States. This fall Palaver will begin its second season as Ensemble in Residence at the Boston Center for the Arts and continue its longstanding residency at Bay Chamber Concerts in Rockport, ME.

As a musician-led ensemble, Palaver is driven by collaborative processes, through which its Co-Artistic Directors share musical and administrative leadership. While each member of the ensemble brings unique experiences to the table, they share a passion for taking classical music beyond the concert hall to engage with new and diverse audiences. In these personal and unconventional settings, Palaver uses music to address social issues, promote education and healing, and inspire peers and community to support the arts.

pindrop is...
a ticketed, classical-ish performance series taking place the first sunday night of every month at the aeronaut taproom in somerville, shining light on the ridiculous pleasure of collective listening. no stodginess. no competing sound. just sweet, shared silence, beautiful beers, and beautiful people. please stay for an after-party with the artists.

The pindrop sessions are offered in partnership with WGBH, Public Broadcasting for New England.