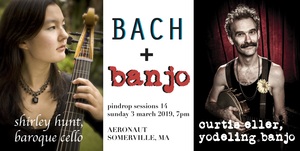 aeronaut brewery, in partnership with boston public broadcaster wgbh, is thrilled to invite you to the pindrop sessions. please join us in our taproom for this one-night-only event:

Shirley Hunt bio:
Internationally respected baroque cellist and violist da gamba Shirley Hunt brings fierce imagination and integrity to the music of the Renaissance, Baroque, and contemporary eras. Praised by The Strad as “stylish and accomplished,” she embraces an eclectic musical life as a multi-instrumental soloist and collaborator.

In high demand as viola da gamba soloist and continuo cellist for the Passions, Cantatas, and Concertos of J.S. Bach, Ms. Hunt has performed and recorded with the nation's leading period instrument ensembles including Boston Baroque, Handel and Haydn Society, Philharmonia Baroque Orchestra, American Bach Soloists, Portland Baroque Orchestra, Musica Angelica, and Bach Collegium San Diego. In 2011 she toured Europe and South America with John Malkovich and Wiener Akademie, and between 2008 and 2010 performed on the adapted viola and harmonic canon in PARTCH, the Los Angeles Harry Partch band.

Ms. Hunt has performed solo recitals at DePaul University, the Berkeley Early Music Festival, the Boston Public Library, King’s Chapel, the Loring-Greenough House, the Early Music Series at the Bryon Colby Barn, and Gore Place Carriage House Councerts. Since 2011 Ms. Hunt has performed a yearly recital as an artist-in-residence at The Museum of Jurassic Technology in Los Angeles. She has also appeared at the Phillips Collection, The Strathmore Mansion, Caramoor, La Jolla Music Society, National Sawdust, the Isabella Stewart Gardner Museum, and the Metropolitan Museum of Art (where she performed on a viola da gamba from the museum’s collection).

​In addition to her concert appearances, Ms. Hunt can be heard on the Parma, NCA, CORO, and Origin Classical labels. She has taught masterclasses at the University of Wisconsin, Adelphi University, and the Universidad Nacional Autónoma de México, and has appeared as a guest speaker at Harvard University’s Quincy House and at the BEMF Young Artist Training Program. She has been an artist-in-residence at The Banff Centre and was a recipient of the Voices of Music Young Artist Award.

Ms. Hunt's primary studies were with Hans Jensen at Northwestern University and with Ronald Leonard at the University of Southern California. She also studied viola da gamba with Mary Springfels and baroque cello with Phoebe Carrai.

Originally from Portland, Oregon, Ms. Hunt was born into a musical family and is the younger sister of the late mezzo-soprano Lorraine Hunt Lieberson. Ms. Hunt divides her time between Boston and New York City. She performs on a 1775 English cello by William Forster Sr. and on a bass viola da gamba by John Pringle.

Curtis Eller's show is like nothing you've ever seen before. Truly one of the most riveting live performers in the Greater 48. He rarely performs in New England, and last time we presented him, a van of devotees drove down from hundreds of miles away. Plus this time he's bringing his full band. Seriously not to be missed!

A Brief History of The American Circus
Curtis Eller is a banjo player, songwriter and rock & roll singer. After beginning his show business career at the age of seven as a juggler and acrobat, the Detroit native turned to the banjo and lit out for New York City where he rose to obscurity as "New York's angriest yodeling banjo player." Citing Buster Keaton, Abraham Lincoln and Elvis Presley as his primary musical influences, Eller became a staple of the beer halls, burlesque houses and underground theaters of the eastern seaboard. Fame proved elusive.

Having spent years toiling in the musical sweatshops of the industrial north, Eller uprooted his family and resettled in some faded, tobacco town in the North Carolina Piedmont to begin the arduous task of assembling a new version of his band, The American Circus. The latest version of the ensemble is a brutish and inelegant rock & roll outfit specializing in banjo music for funerals, gospel tunes for atheists and novelty dance fads for amputees. A lavish, Hollywood, dance sequence unfolding on the floor of a Chicago meatpacking plant in 1894.

Eller's numerous compositions describe a dreamlike vision of American history where all points in time have collapsed into one. Past recordings have seen a ghastly parade of historical luminaries, from Abraham Lincoln and Buster Keaton to Amelia Earhart and Joe Louis, sharing the spotlight with a host of Civil War generals and corrupt 19th century politicians.

The group's latest phonographic recording, How to Make It in Hollywood, is a compact collection of glittery show tunes, sentimental tear-jerkers and rock & roll rave-ups whose lyrics are populated with two-bit prize fighters, Hollywood has-beens, lapsed gospel singers and forgotten pop stars. Eller relentlessly tours the US and Europe with an expanding and contracting cast of misfits. Recently, the band embarked on an ambitious and successful, 40 date tour of the UK, Ireland and Hungary.

pindrop is...
a ticketed, classical-ish performance series taking place the first sunday night of every month at the aeronaut taproom in somerville, shining light on the ridiculous pleasure of collective listening. no stodginess. no competing sound. just sweet, shared silence, beautiful beers, and beautiful people. please stay for an after-party with the artists.

The pindrop sessions are offered in partnership with WGBH, Public Broadcasting for New England.