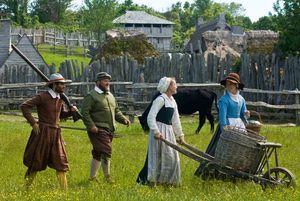 The Plimoth colonists, or “Pilgrims” as they were later called, were a diverse group of Separatists and Anglicans, religious zealots and irreverent opportunists. They brought with them music experiences as varied as their reasons for coming to the New World, and the Plimoth Colony heard not just solemn English psalms, but also catches, ballads, and dance tunes. Our program features music of Morley and Dowland, catches by Ravenscroft, and selections from the Dutch ‘t Uitnement Kabinet, the Ainsworth Psalter, and John Playford’s English Dancing Master. You’ll also hear fictional “diary entries” read in Original Pronunciation, the English of Shakespeare, Queen Elizabeth I--and the Pilgrims!

Join Seven Times Salt in Shirley’s beautiful 1773 meetinghouse as they trace the colonists' journey from turbulent England to religious refuge in the Netherlands and on to their new lives on the unfamiliar shores of New England.

Presented by The Shirley Meeting House

15/09/2019 16:00:00 15/09/2019 17:10:00 15 Pilgrims' Progress: Music of the Plimoth Colony Settlers The Plimoth colonists, or “Pilgrims” as they were later called, were a diverse group of Separatists and Anglicans, religious zealots and irreverent opportunists. They brought with them music experi... The Shirley Meeting House, Shirley, MA 01464 Organizer Organizer e-mail false DD/MM/YYYY Reddit