Pilgrims of The Night 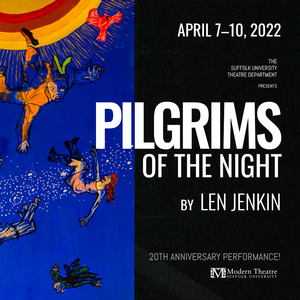 20 years later (plus two for pandemic delays), professor Wes Savick returns to his Suffolk University '00 directorial debut with an all-new production of "Pilgrims of the Night."

Stranded at a ferry terminal during a dark, stormy, seemingly endless night, seven fellow travelers journey to the most fantastical places without ever leaving. Written by master storyteller and Obie Award winner Len Jenkin and inspired by Boccaccio's "The Decameron," "Pilgrims" is a celebration of imagination in times of adversity, community in times of isolation, and hope in times of despair.

Wes Savick returns to his directorial debut at Suffolk with an all-new student performed production. The six tales told in the play range from the wacky to the poignant straddling the supernatural world and exploring our present human condition.

Show dates and times are Thursday April 7 at 7:30pm, Friday, April 8, Saturday, April 9 and Sunday, April 10th at 8pm. There will be a matinee performance at 3pm on Sunday the 10th. All shows are at the Modern Theatre, 525 Washington St., Boston.
"Pilgrims of the Night" is presented and produced by The Suffolk University Theatre Department.