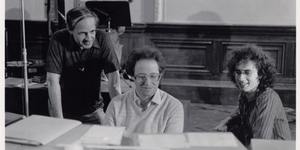 Le Laboratoire Cambridge along with the MIT Media Lab
Presents:

Pierre Boulez (1925-2016) was arguably the most important classical composer of the second half of the 20th century. Coming of age right after WWII, he sought to create a revolutionary new music based on science and mathematics, rejecting all traditional notions of melody, harmony, sonority and narrative. Nowhere was his radical vision more evident than in his seminal works for two pianos, Structures I (1952) and Structures II (1961).

This concert, performed by the award-winning piano duo Quattro Mani (Susan Grace and Steven Beck), will present a section of Boulez’s Structures along with pieces inspired – or shocked into being – by that mammoth work. Frederic Rzewski, educated at Harvard and long-time exile in Europe, combines Boulezian complexity with provocatively populist intensity in his Winnsboro Cotton Mill Blues. Fred Lerdahl, educated at Princeton and professor at Harvard and Columbia, rejected Boulez’s abstract systems to create his own Chomsky-inspired “generative theory of tonal music,” the first complete music theory based on neuroscience principles. His anti-Boulez vision – an individualistic reimagining of musical tradition – is beautifully audible in his Quiet Music.

Tod Machover – composer, inventor and professor at the MIT Media Lab – began his career as the first Director of Musical Research at Pierre Boulez’s IRCAM institute in Paris. His Re-Structures for 2 Pianos and Electronics was commissioned in 2015 by the Lucerne Festival, and was premiered there to celebrate Boulez’s 90th birthday. Mark Swed of the Los Angeles Times wrote that Re-Structures “morphs from hardcore 1950s serialism into fresh, rhythmically driving, all-cylinders-firing, electronically enhanced Machover…Thrilling!” The work – which was recently recorded by Quattro Mani for Bridge Records – will receive its East Coast premiere at this concert, two nights before it is performed by Quattro Mani at Carnegie Hall.

Machover – who, besides his long-time association with Boulez is also a close colleague and friend of Rzewski and Lerdahl – will provide commentary for the evening, showing how two acoustic pianos can still create resplendent musical worlds, and how rigorous scientific explorations can influence artistic expression in profound and often surprising ways.

Grammy nominated pianist, SUSAN GRACE has performed solo and chamber recitals, and has appeared as soloist with orchestras in the United States, Europe, the former Soviet Union, Korea, India and China. She has also performed in the Aspekte Festival in Salzburg, St Paul Chamber Orchestra’s new-music series Engine 408, Phillips Collection in Washington, D.C., the Grand Teton Festival, the Cape Cod Music Festival, Festival Mozaic, Concordia Chamber Players, Music at Oxford, and the Helmsley Festival in England. Grace has recorded for Bridge Records, the Belgium National Radio, WFMT in Chicago, the Society of Composers, Wilson Audio, Klavier International and Klavier Music Productions. Her latest recording on the Bridge label of Stefan Wolpe’s violin and piano music was listed in the London Sunday Times as one of the top ten Contemporary recordings of 2015 and was also included on the Fanfare “Critics Want List 2016”. Grace was nominated for a Grammy in 2005 in the Best Small Ensemble Performance category.
Grace is associate chair, artist-in-residence and senior lecturer in music at Colorado College. She is also music director of the renowned Colorado College Summer Music Festival, now in its 34th season. She was awarded the Christine S. Johnson professorship of music from 2014-16. In June 2014, Mayor Steve Bach and the city of Colorado Springs presented Ms. Grace with the Spirit of the Springs award for her work with the Colorado College Summer Music Festival. She is a Steinway Artist.
---
Pianist STEVEN BECK continues to gather acclaim for his performances and recordings. Recent career highlights include performances of Beethoven’s variations and bagatelles at Bargemusic, where he first performed the Beethoven sonata cycle. In addition, this season he performs with the Orlando Philharmonic and repeats his annual performance of Bach’s “Goldberg Variations” on Christmas Eve at the Barge; this has become a New York institution. Steven Beck is an experienced performer of new music, having worked with Elliott Carter, Pierre Boulez, Henri Dutilleux, Charles Wuorinen, George Crumb, George Perle, and Fred Lerdahl, and performed with ensembles such as Speculum Musicae and the New York New Music Ensemble. He is a member of the Da Capo Chamber Players, the Knights, and the Talea Ensemble. He is also a member of Quattro Mani, a piano duo specializing in contemporary music. Mr. Beck’s discography includes Peter Lieberson's third piano concerto (for Bridge Records) and a recording of Elliott Carter’s “Double Concerto” on Albany Records.

More information about Steven Beck can be found at his website, stevenbeckpiano.com.