Peter Fogel’s “Til Death Do Us Part… You First!” 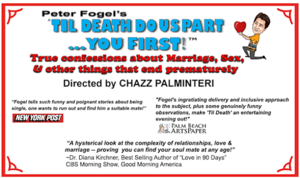 Award-winning comedian/actor Peter Fogel has done it again with the creation of this delightfully funny Valentine's Weekend Show. No stranger to Boston audiences, last year he had audiences rolling in the aisle with his successful engagement of My Mother’s Italian, My Father’s Jewish & I’m in Therapy. The Regent Theatre, located at 7 Medford St. in Arlington, hosts this critically acclaimed 75-minute multi-media solo show. Directed by Academy Award Nominee Chazz Palminteri, the show surrounds Peter Fogel and his struggles with romance.  He is an eternal Bachelor having suffered from major commitment issues. Now, the love of his life has just broken up with him on Valentine's Day. Sensing his own mortality, he takes the audience on a journey down his memory lane by expounding on many of his romantic disasters.