'Peter and The Starcatcher' 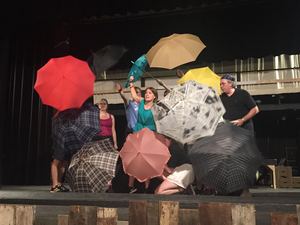 The Footlight Club’s production of “Peter and The Starcatcher” opens in Jamaica Plain on September 16.

Can Molly , The Boy and a couple of orphans defeat a bandit of Pirates including the evil Black Stache and island natives to keep the “star stuff” in the right hands? Found out in “Peter and The Starcatcher” which opens at The Footlight Club in Jamaica Plain on September 16.

“Peter and the Starcatcher” is the prequel to J.M. Barrie’s beloved story Peter Pan and tells the story of the Neverland that you never knew. When the motherless Molly Aster is left aboard the Neverland by her father Lord Aster who then boards The Wasp with the Queen’s treasure, she meets The Boy “Peter” and a couple of orphans. Together Molly and Peter along with the orphans defeat a band of pirates and island natives including the evil Black Stache in order to keep the treasure in the right hands, along the way teaching Peter what it means to have a family and allow him to become the boy who doesn’t grow up. “Peter and The Starcatcher” is the winner of several 2012 Tony Awards including Best Costume Design, Best Scenic Design, and Best Performance by an Actor in a Featured Role in a Play for Christian Borle.

The production is directed by Julia Deter and Assistant Directed by Alicia Powell.

PERFORMANCE DETAILS
“Peter and The Starcatcher” opens September 16 and runs for 6 shows through September 30. Performances are at 8pm on September 16, 22, 23, and 30; with Sunday matinees at 2pm on September 17 and 30. Tickets are $22/$20 for members and seniors, and are available through the box office; or at www.footlight.org.

The Footlight Club is located at 7A Eliot Street in Jamaica Plain and is America’s oldest Community Theater.