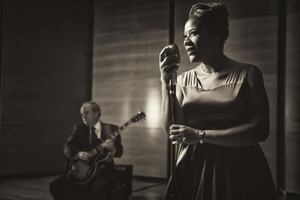 We have structured our jazz spot and restaurant on the supper club model. Eating and drinking is how you help us to maintain our weekly offering of Boston's premier jazz artists! Bon Appétit!

ABOUT THELONIOUS MONKFISH:
We're passionate about ethnic flavors & jazz, and so we’ve branded our unique take on sushi & Asian specialties: Thelonious Monkfish. Nothing warms the palate like an explosion of flavor or the heart like a burst of song! Chef Ginger loves to jam on Asian culinary themes! Her menu reflects both gustatory tradition and a sense of play and innovation.

Live jazz, sushi, and our personal interpretation of Japanese, Thai, Chinese + Vietnamese cuisines are the mediums through which we hope to disperse kindness + loving service. Nestled in Central Square between MIT and Harvard University, we serve Cambridge + Boston's hungry students, professors, professionals, tourists + business people. Thursday, Friday, Saturday and Sunday evenings, Boston's top jazz performers create a cool vibe on our Jazz Baroness Room stage–one of the many ways we aim to enhance your dining experience!

Some people are just born to music.

Patrice Williamson’s childhood home in Memphis, Tennessee was filled with song. Her late father, Webster Williamson, an avid amateur singer, choir director, and pillar of the St. Stephen’s Baptist Church music ministry, introduced his children to both sacred music and the secular styles of greats like Louis Armstrong, Nat King Cole, and Lena Horne. With the encouragement of her mother, Lillie Rivers Williamson, Patrice followed in the footsteps of her elder sister, Denise, taking up the violin and making her debut at age four, playing a duet with her sister in front of the St. Stephen’s congregation.

From then on, she was hooked on music and performing. To her violin studies, she added piano (at age seven) and flute (at 11). She imagined herself growing into a world-famous concert artist: “I spent a lot of time thinking about what I would say to Johnny Carson the first time I played the flute on ‘The Tonight Show.’”

Patrice carried the dream into her teens, but chose a “practical” major, communications, when she enrolled at the University of Tennessee. In her second year, however, she realized her heart was elsewhere and decided to major in music. “I remember having to make that phone call home,” she says. “I wasn’t sure what my parents reaction would be.” As it happened, they were supportive. “Well, it’s about time,” said Lillie. “I didn’t know what you were doing in broadcasting when you’ve been in music all your life.”

Her focus remained on classical performance; she served as principal flutist for the opera and symphony orchestras. It wasn’t until the conductor of the UT Studio Jazz Orchestra overheard her scatting during a rehearsal break, and immediately offered her a vocal solo, that she considered singing as a possible career path. Encouraged by UT faculty jazz pianist Donald Brown, she headed to New England Conservatory to focus full-time on her voice, under the guidance of award-winning RCA recording artist Dominique Eade.

In Boston, Patrice hit the ground running. Before her Master’s degree studies were complete, she was weighing rival offers for a four-month performance engagement at Somerset’s Bar in Singapore (the country’s premier jazz venue) and further studies at NEC in the school’s prestigious Artist Diploma program. In the end, she managed to do both.

A regular at Boston’s celebrated Regattabar since 1996, she has also appeared in the company of Tony Bennett, James Moody, and Cassandra Wilson at the Tanglewood Jazz Festival; and Danilo Perez and Kevin Mahogony at the Marblehead Jazz Festival. Around the U.S., she’s been heard at Boston’s Symphony Hall, Jordan Hall, Hatch Shell, and Isabella Stewart Gardner Museum; as well as the IDB Cultural Center Concert Series in Washington, DC.

Singapore, having had a taste of her, wanted more; and Patrice has since returned to the scene of her first triumph as a special guest performer in the nation’s New Year’s Eve Millennium Celebration; and as part of the Eden Project, an international group of female jazz improvisers who rocked the International Women’s Forum in March 2000.

The critics and the jazz community have not been slow to recognize that this talent is for real.

The response to her debut recording, My Shining Hour (released in September 1998) has been overwhelmingly positive, drawing favorable comparisons to legends like Ella Fitzgerald and Sarah Vaughan. She was honored with a coveted “Best of Boston” award in 1997, and in 1999 and 2000 was a nominee for “Best Jazz Vocalist” by the Kahlua Boston Music Awards.

Her former teachers, now senior colleagues, are quick with their own praise. Says Dominique Eade, “Patrice is a hard-swinging interpreter and a refreshingly accomplished jazz vocal improviser.” Ran Blake, head of NEC’s Contemporary Improvisation department, sums it up: “It’s a breathtaking voice.”