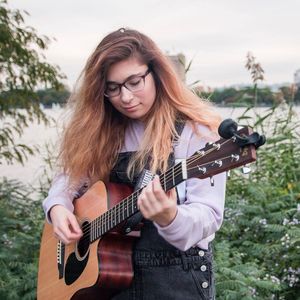 Watch Teghan Devon perform from home during this time of social distancing! Donations will be split between Teghan and Passim.

Teghan Devon is a Boston based award-winning singer-songwriter. Her music is a cross-pollination of folk, indie rock, and pop. She has been praised for her "honest and clear vocals . . . an artist who doesn't need to hide behind flare to make stellar music" ("Five Modern Singer-Songwriters To Help You Face The Day," EarToTheGroundMusic). In December 2018, Teghan won multiple awards in the Mid-Atlantic Song Contest, including Young Artist winner and a Silver Award. Teghan was selected as a New Folk Finalist at the Kerrville Folk Festival in 2018 and 2017. In July of 2018 Teghan released her first full-length album “Fingers Crossed”. She will release her new EP “Little Lion”, on April 10th, 2020.