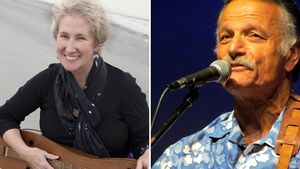 Watch Jon Gailmor and Gail Finnie Rundlett perform from home during this time of social distancing! All funds collected will be split between Passim and the artist.

Jon Gailmor was born in New York City and failed to grow up in the Philadelphia area, Westport, Connecticut, Providence, Rhode Island, Newburyport, Massachusetts and at the University of Pennsylvania. In 1971, he hitchhiked through 14 countries and entertained tourists in French, Italian and Greek cafes. Jon arrived in Vermont in 1977 and still hasn’t matured. He has sung in a tennis stadium in Lima, Peru, in theatres and on the streets of Quito, Ecuador, in schools and concert halls in the former Soviet Union, in folk clubs in the British Isles and Ireland and between the grapevines of southern France. In this country, he performs in clubs, coffeehouses, schools, universities, child care and senior centers, prisons, hospitals, weddings, house parties—in every setting and for every population under the sun and then some. Jon presents songwriting residencies and workshops for students in pre-school through college, has been honored as an “Extraordinary Vermonter” by the governor, received the Mayor’s Peace Prize in Burlington and was awarded a Silver Citation by the Vermont Arts Council. Jon was chosen as Vermont’s representative and performed at the 25th anniversary of the Kennedy Center in Washington, D.C. In 1996 he was chosen to carry the Olympic Torch through Brattleboro on its way to Atlanta and didn’t drop it. Recently, he received the Ellen McCulloch Lovell award for Arts in Education. He lives with his family and other creatures, among the 800 souls of Elmore. To find out more than you probably want to know about him, feel free to go to www.jongailmor.com.

Gail Finnie: Gail Finnie Rundlett is a singer-songwriter, drawing some of her repertoire from American traditional music. She plays guitar, ukulele and is considered to be one of the primary innovators on the Appalachian dulcimer in New England. Her career in the Boston folk scene spans thirty-five years, with four solo albums, and two with her former a cappella group Taproot. She’s a dynamic singer whose optimistic spirit is infectious, and her love for performing delights anyone who hears her.