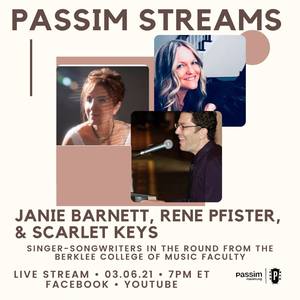 Singer-songwriters in the round from the Berklee College of Music faculty!

Virginia native Janie Barnett has worn many hats in her career: An Americana singer-songwriter, whose 2017 album release “You See This River” was a first round nominee for a Grammy and Americana Music Association new artist; named one of the year’s best on several Roots/Americana lists; a backup singer both live and on recording for the likes of Linda Ronstadt, Rickie Lee Jones, Bonnie Raitt, and Celine Dion with performances from the Paramount Theatre to City Winery to Saturday Night Light; the voice of Chevrolet, Campbell’s Soup, Sprite, and countless other national commercials; an award-winning producer/arranger for other artists. Barnett is currently releasing music from her Americana-framed album of Cole Porter songs. She is on the faculty at Berklee College of Music. Music news, stories, and videos can be found at www.janiebarnett.com

Scarlet Keys is a Professor of Songwriting at Berklee College of Music and is a former staff writer for Warner Chappell. Her writing has garnered her a gold record in Sweden, a top ten hit in Britatin, and songs recorded in the U.S. by artists spanning genres from jazz, country, Americana to folk and pop. Scarlet’s songs have appeared on film and TV, as well as national commercials and she has collaborated with artists such as Chris Stapleton, Charlie Puth, and Melissa Ferrick, to name a few. Some of Scarlet’s former students include Charlie Puth, Charlie Worsham, Liz Longley, and Betty Who. Scarlet continues to write, perform, and teach both at Berklee and songwriting clinics across the U.S., and has written articles for The Songwriters Market and American Songwriter Magazine. She recently released her first book, “The Craft of Songwriting: Music, Meaning and Emotion.”

Rene Pfister is an actor, director, songwriter, and pianist. Pfister has produced over 30 musicals including Gay Country Christmas and his adaptation of Alice in Wonderland winner of the 2015 Guilford Residency at Berklee. As a performer Pfister has toured nationally and internationally, including performances in the 30th Anniversary European Tour of Hair and the voice of Figaro in Oh, Figaro! with the National Theater for the Deaf. He most recently acted with Alice Ripley and Beth Malone in a re-visioned virtual production of Spring Awakening in fall of 2020. Rene is Artistic Director of BTAC- The Berklee Theater Arts Collaborative at Berklee College of Music and continues to teach internationally in China, Argentina, Kenya and Japan. He is also the founder and director of Make Your Life a Musical™, an event company featured in The New York Times and The Boston Globe. www.makeyourlifeamusical.com.
——————