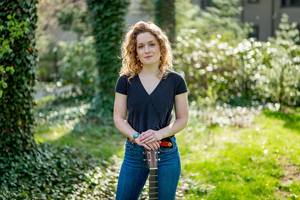 When Alice Howe wants to unlock a memory or understand an emotion, she steps outside. “There’s something about the stillness,” she says. “When I’m sitting with my guitar and looking out at a forest or the ocean, I have the space to reflect to on people and places. My muse strikes.”

Vistas and the faces and emotions they summon unfurl with compelling grace on Visions, Howe’s anticipated debut album. A modern love letter to 60s and 70s folk and timeless blues, Visions pays homage without succumbing to imitation, and offers an intimate snapshot of a young artist discovering her own power. Early praise for Visions has streamed in from gatekeepers such as American Blues Scene and smitten local press alike. “Sometimes we’re lucky enough to catch an up-and-coming artist as they fly into our radar,” critic JD Nash writes. “This is one of those times.”

Howe’s path to “up-and-coming” artist seems both fated and winding. She grew up in Newton, Massachusetts, just outside of Boston, in a home filled with music and art. Long outdoor walks were encouraged, and Howe would often disappear to wander through her grandmother’s garden next door or to journal and turn experiences into songs. “I can’t remember not singing,” she says with a laugh. Her mother always had a record to put on––Muddy Waters, Taj Mahal, and other blues giants were favorites. Howe sang with her brother and her dad, Sandy––a gifted painter turned successful architect––and sang alone to herself, improvising and composing constantly.
——————