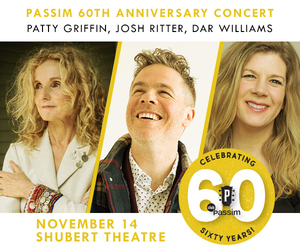 Grammy-award winner Patty Griffin will join Josh Ritter, Dar Williams, and special guests to celebrate the 60th anniversary of Passim with a benefit concert at the Boch Center Shubert Theatre on Thursday, November 14!

Proceeds from the performance will benefit Passim, a nonprofit music organization dedicated to providing exceptional and interactive live musical experiences for both performers and audiences. Since first opening its doors as Club 47 in 1958, Passim has been one of the country’s premiere listening rooms, showcasing talent that has helped to shape generations of musicians and fans in the United States and beyond.

Each of the artists performing in the benefit concert has a special connection to Passim. Patty Griffin was working in Harvard Square when she first started playing music. She played as an opening act for others at Passim before moving quickly to headliner status. Over the next two decades, she recorded nine studio albums and two live collections, receiving seven Grammy nominations as well as one Grammy award for Best Traditional Gospel Album, which she won for her 2011 album Downtown Church.

Upon graduating from Oberlin College, Josh Ritter moved to New England and began performing at Club Passim’s Open Mic nights. His first headline appearance was at the organization’s annual campfire. festival on Memorial Day Weekend in 2000. After opening at Passim for Dave Carter & Tracy Grammer, Josh signed with their label, Signature Sounds. Named as one of the 100 Best Living Songwriters by Paste Magazine, Josh has since recorded nine studio albums and has toured all over the world sharing the stage with musicians such as The French Kicks and Joan Baez.

In the early 1990s, Dar Williams was playing local Cambridge venues, alongside artists such as Ellis Paul and Vance Gilbert. She first appeared at Club Passim in 1992, as part of a Sunday afternoon in-the-round show and by the mid-90s, she was headlining her own shows. Today, she’s released ten studio albums, authored four books, and toured with acts such as Joan Baez, Ani DiFranco, Loudon Wainwright III and Shawn Colvin.

“We are thrilled to have Patty Griffin, Josh Ritter and Dar Williams join us for the celebration of Passim’s 60th anniversary,” said Matt Smith, managing director of Passim. “Like many artists, they performed at Passim early in their careers, providing audiences with a first glimpse of what was to come. We expect to have other Passim artists from many generations as part of this show. With all of their help, we’ll continue to offer other rising artists the same opportunity.”

Founded in 1958 as Club 47, Passim is best known for the role it played in the folk music revival of the sixties when it helped launch the careers of Bob Dylan, Joan Baez and Joni Mitchell. It was run by Bob and Rae Ann Donlin during the seventies and eighties, and was relaunched as a non-profit when they retired in 1994. In recent years, the club has continued to serve as an all-ages incubator giving artists a place to develop their craft and find their voice.

“Passim has become much more than just a place to hear live music,” said Jim Wooster, executive director of Passim. “Through our Passim School of Music and our summer concert series, it’s become a place where artists can develop and collaborate and our community can get to know and support them. And in doing so, it’s keeping the rich tradition of folk and acoustic music alive.”

Passim has reinforced its commitment to nurturing up-and-coming talent and new musicians with the Passim School of Music, which has been offering classes and workshops for adults since 2000. In 2008, Passim launched the Iguana Music Fund which, with the support of a generous anonymous donor, provides grants to local musicians looking to further their career or give back to the community.

Passim maintains a strong presence in the community by presenting several free concert series throughout Cambridge, including the Harvard Science Center Series, the Danehy Park Concert Series and the Passim/Berklee Summer Concert Series.

In 2018, Passim celebrated 20 years of its campfire. festival, which fills each Memorial Day and Labor Day weekend showcasing rising local talent as well as national and international touring artists. Passim also presents the Boston Celtic Music Festival twice a year, the Down Home Up Here Bluegrass festival every April, and a monthly Discovery Series which showcases emerging young artists.

Passim’s 60th Anniversary Concert is generously supported by Folk Americana Roots Hall of Fame, an initiative of the Boch Center.