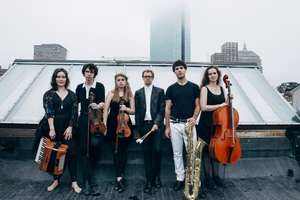 Though each member of American/Swedish Night Tree originates from a different musical world, the six members have come together to a create a new sound that is unique to their instrumentation and musical voice, both attracting and bewildering enthusiastic crowds while connecting folk music lovers, cafe radio junkies, jazz enthusiasts, free-improvisers, and beyond.

In September of 2016, six wildly diverse musicians came together unexpectedly within the walls of Boston’s New England Conservatory to form New Acoustic band, Night Tree. The group, all students at NEC, were named the Conservatory’s WildCard Honors Ensemble for 2016-2017. Awards for this title included a sponsorship from NEC, a headlining performance at the historic Jordan Hall, and a year of working with Winifred Horan, fiddler and co-founder of Irish super-band, SOLAS. Night Tree released their debut album on September 1st of this year, produced by Séamus Egan, another founding member of SOLAS. Their album was ranked in the top 15 of every category in the compilation by Richard Gillmann from FOLKDJ-L playlists based on 12,417 airplays from 127 different DJs.
These six conservatory-trained musicians have absorbed genres from across the globe. Night Tree is unique, not only for its abnormal instrumentation of two fiddles, cello, accordion, saxophone, percussion, and the occasional viola and mandolin, but for their collective representation and incorporation of traditions from Irish, Classical, Swedish, Jazz, Klezmer, and Afro-Cuban music. Each artist’s personality is given a spot to emerge with fiery improvisation, individual compositions, and a pristine ear. The band thrives on playing in darkness as to allow themselves the opportunity to solely listen with the absence of any possible visual distractions. They react to each other at any given time, in a matter of seconds. They have learned to get inside each other’s musical minds, creating one blossoming and unpredictable wave of sound that is Night Tree.

The band grew up with the traditional music scene, deeply embedded in the family. As Kolonien they reinvent their roots with their rich Swedish harmonies, both instrumentally and vocally.
Their journey started in their teens, when they left their countryside home to travel around Sweden as protest singers in the Swedish Green movement. When they got invited to perform at a Zanzibar festival in Tanzania in 2010, things really started taking shape.
It was meant as a one-time gig, but the songs and the conversations of change fell in place unexpectedly well and they decided to start a band and write their own songs.
Kolonien have released two albums. Twice prized and awarded at the Swedish Folk and World Music Awards. Also twice nominated for one of their offspring projects Världens Band for which they’ve gathered thirteen musicians from six countries.

Reddit
08/11/2018 20:00:00 08/11/2018 20:00:00 America/New_York Passim presents Night Tree & Kolonien Though each member of American/Swedish Night Tree originates from a different musical world, the six members have come together to a create a new sound that is unique to their instrumentation and m... Club Passim, Cambridge, Massachusetts 02138 false DD/MM/YYYY