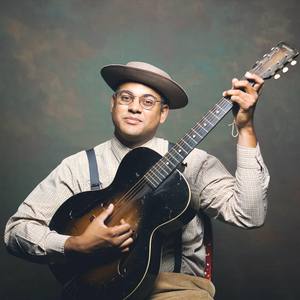 Dom Flemons is originally from Phoenix, Arizona and currently lives in the Washington, D.C. area. He is known as “The American Songster” since his repertoire of music covers nearly 100 years of American folklore, ballads, and tunes. Flemons is a music scholar, historian, record collector and a multi-instrumentalist. He is considered an expert player on the Banjo, Fife, Guitar, Harmonica, Percussion, Quills, and Rhythm Bones. He has performed with leading musicians, such as, Mike Seeger, Joe Thompson, Martin Simpson, Boo Hanks, Taj Mahal, Old Crow Medicine Show, and Guy Davis. He has been a professional touring musician for the past ten years and has traveled around the nation and the world presenting traditional folk and roots music to diverse audiences. Flemons has performed as a soloist at prestigious venues, such as, Carnegie Hall, Cecil Sharp House, the Grand Ole Opry, the Opening Ceremony for the National Museum of African American History and Culture, National Cowboy Poetry Gathering, Newport Folk Festival and represented the United States at the 2017 Rainforest World Music Festival in Kuching, Malaysia.
In 2005, Flemons co-founded the Carolina Chocolate Drops who have won a GRAMMY for Best Traditional Folk in 2010. He left the group to pursue his solo career in 2014. In 2016 the Carolina Chocolate Drops were inducted into the North Carolina Music Hall of Fame and are featured in the Smithsonian National Museum of African American History and Culture.

For more than 25 years Kevin “B.F.” Burt has been electrifying audiences throughout the Midwest dispelling the myth that true blues has no roots in Iowa. His soul-inspired presentation is unique which consistently get him compared to a range of artists like Bill Withers and Aaron Neville, with the ability to build an audience rapport that has been compared to B.B. King.
Kevin is a self-taught musician (vocals, harmonica, and guitar) whose smooth, warm vocal presentation sets a mood of relaxed exhilaration, with a welcome mixture of serious music and infectious humor audiences of all ages seem to enjoy. His voice and presence are powerful. His unique delivery ranges from the sweetest, fullest, juiciest come-on to the most playful growl. Though he performs between 325 and 400 shows a year, he holds nothing back night after night and audiences leave knowing that.