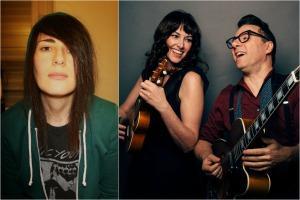 Motivation comes from the strangest places… in this case, singer and multi-instrumentalist Julie Jay's inspirational story of second chances in life comes from personal experience. After her improbable comeback from a traumatic surgery that left her in a coma and silenced her voice for 6 months, her strength and resolve not only gave her voice back, but drove her to begin creating as soon as she was able. Upon the suggestion of her friends, she began writing and recording. She then hired producer/engineer James Frazee (Sharon Van Etten, Beck, Sonic Youth, etc.) to mix the tracks for her. The fruit of their labors is the EP, "Awake" by Tiny Dinosaurs and has 5 pure and powerful indie rock gems on it that are full of energy and emotion.
The new single, "Sit And Stare" is as if you were listening to the impossible sound of looking up at the stars, filled with wonder and amazement. It is the 2nd release from Tiny Dinosaurs' new EP, "Awake" and the follow up to the 1st single, "Shut Out The Light," which features Peter Silberman of The Antlers.
"Awake" is the first volume of a two part EP that contains 5 songs. Other tracks include "Shake," "Never Be" and "Insomnia." Second EP "Asleep" is due early next year. "Awake" will be released on all digital platforms including iTunes and Amazon as well as on CD and Vinyl on October 21st, 2016.

Victor & Penny deliver swing-infused folk-jazz in the band’s signature high-energy style with joy, humor, and soaring musical improvisation. Victor & Penny were named “Best Folk Ensemble 2015” by the PITCH; “Standout Concert of the Year” by the Joplin Globe; and are two-time Folk Alliance International official showcase artists. V&P feature tight vocal harmonies, dazzling guitar work, and a fiery ukulele. This corset-tight group brings a modern Kansas City voice to their original tunes and prohibition era jazz with sterling musicianship. When joined by their fine band, Loose Change Orchestra, the red-hot horn section and upright bass bring sparks a-plenty and virtuosic musicianship. V&P impress and delight with charm and hot licks and they are an “absolute rollicking blast.” Since 2010, Victor & Penny (aka Jeff Freling and Erin McGrane) have been thrilling audiences nationally with their deft blend of originals, hot jazz, and swing.
The group released a new full-length CD, “Electricity” (March 2016) which debuted on the Folk Radio DJ charts at #12 with the #3 song. “Electricity” crackles and sparks with joy and regret; truths and dares; love and love gone wrong all set to a score of vibrant, rhythmic swing and virtuosic musicianship. Electricity is the culmination of 180,000 miles, 5 years and nearly 1,000 performances and is a testament to the incomparable vivacity of Victor & Penny’s live show, with newly added sophistication and rich instrumentation.

Victor & Penny are Jeff Freling (Blue Man Group, Chicago) and Erin McGrane (George Clooney’s, “Up in the Air” and cabaret troupe Alacartoona). Ms. McGrane is a published poet (Spartan Press 2016), an ArtsKC Fund Inspiration Grant recipient, a Mid-America Arts Alliance Professional Development Grant recipient as well as a fellow of the ArtistINC program for which she currently serves as a peer facilitator and a workshop presenter. Formally trained at Berklee School of Music (Boston) and the Conservatory of Music (Kansas City), Mr. Freling participated in the international program, The Acoustic Guitar Project in 2014 and is an accomplished composer, arranger, and outstanding instrumentalist. The members of the Loose Change Orchestra include classically trained reeds virtuoso James Isaac who fronts his own highly respected jazz quartet, The James Isaac Group and is a member of the People’s Liberation Big Band. Bassist Rick Willoughby attended the UMKC Conservatory of Music and is a member of Quixotic, The Snow Globes, and the Barclay Martin Ensemble. Multi-instrumentalist Kyle Dahlquist (Hardship Letters, Liz Finity Affair) rounds out the lineup with trombone, accordion, and vocals.