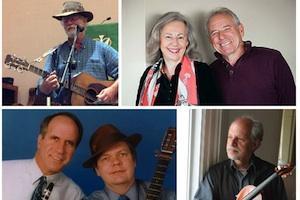 Bill Staines, Mason Daring and Jeanie Stahl, Guy Van Duser and Billy Novick, and Stuart Schulman are playing Club Passim in Cambridge, MA on Saturday, December 9th at 7 PM. Well into his fifth decade as a folk performer, Bill Staines has gained an international reputation as a gifted songwriter and performer. Bill Staines' music is a slice of Americana, reflecting with the same ease his feelings about the prairie people of the Midwest or the adventurers of the Yukon, the on-the-road truckers, or the everyday workers that make up this land. Film composer Mason Daring has explored many paths on the way to his current career, but his professional life has always returned to the world of music. Jeanie Stahl is a master of ballads and hot jazzy torch songs who first attracted attention in a duo that she shared, in the late-1970s and early-80s, with Mason Daring. Besides collaborating on two albums, Stahl and Daring recorded Daring's soundtracks for several John Sayles-directed films. Jeanie began to perform as a soloist in the early-1980s. "Elegant." "Riveting." "Soulful." "Classic mastery." These are a few of the terms that have been used to describe the unique and stunning swing-jazz music of acoustic guitarist Guy Van Duser and clarinetist Billy Novick. Together as a duo for more than forty years, Guy and Billy have performed in concerts, clubs and festivals all over North America and Europe.An incredibly talented musician, who is equally at ease playing classical, pop, show tunes and, his favorite, the jazz violin, Stuart Schulman has played with well-known performers such as Tom Rush, Jonathan Edwards, Bill Staines, and Kate and Ann McGariggle from Canada. In addition to many live performances, Schulman recorded movie soundtracks. Tickets are on-sale now at www.clubpassim.org.