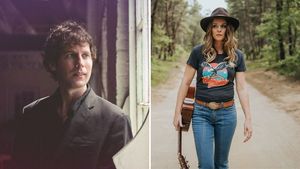 Watch Jesse Terry & Monica Rizzio perform from home during this time of social distancing! All funds collected will be split between Passim and the artist.

Jesse Terry
A true musical journeyman, Jesse Terry has made it his mission to share his love of music fully and completely, without regard for shading his emotions or tempering his convictions. By his own definition, he’s never been a cautious individual, but rather one who finds inspiration and optimism in the solace and joy making music brings him; and that which he can impart to others. In that regard, his artistic quest has become satisfying and self-fulfilling.

“Things happen for me at the right place and time when I’m focusing on my art and connecting with people,” Jesse suggests. “I’ve always had the desire to spread peace and unity through my music. This gives me a tangible purpose, even when life doesn’t seem to make much sense.”

Monica Rizzio
With a perspective equally influenced by her Texas roots and her Cape Cod home, Americana singer-songwriter Monica Rizzio has emerged as one of the finest talents in the East Coast music scene. Monica released her debut album, aptly named Washashore Cowgirl, in 2016; where it was Monica’s solo introduction after a decade in the trio Tripping Lily, Sunshine is Free is her expansion -- after time spent on the road, she realized it was time for her to start collaborating again and recorded the album in Nashville with producer Michael Rinne and a stacked lineup of guest musicians. Throughout the eleven tracks on Sunshine Is Free, Monica appreciates the little things in life and looks for silver linings where necessary. It’s clear she has a keen ability to connect; her songs are often autobiographical but delivered through a fictional approach that aids in creating a universal experience for the listener -- whether it’s expressed using her trademark sense of humor or with such striking honesty that the pain in her voice is tangible.