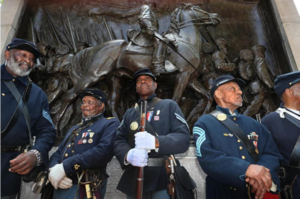 The Partnership to Renew the Shaw 54th Memorial invites the Greater Boston community to a free screening of the Academy Award-winning film Glory at the Bright Screening Room @ Emerson College.

Join park advocates and civic leaders to celebrate the 30th anniversary of this seminal film showcasing the story of U.S. Civil War Colonel Robert Gould Shaw and the 54th Massachusetts Volunteer Infantry Regiment, the first all-black volunteer Union company organized in the North to fight for their freedom. The event is part of a year of programming surrounding the restoration of the historic Shaw 54th Memorial on Boston Common and the important ongoing public dialogue on race. More information can be found at http://shaw54thmemorialrestoration.org.

The movie will be introduced by the Honorable Byron Rushing, former Representative for the Ninth Suffolk district in the Massachusetts House of Representatives (1983-2019), and Martin Blatt, Northeastern University Professor of the Practice in History and Director of Public History Program. Martin Blatt will join Byron Rushing for a post-film discussion at the Wednesday screening at Emerson College.

Blatt has served as Professor of the Practice and Director of the Public History Program at Northeastern for the last five years. Blatt worked for the National Park Service in Boston and Lowell for twenty-four years as a historian and cultural resources manager. Blatt was Curator of the exhibit, Long Road to Justice – African Americans and the Courts, on permanent display at the Brooke Court House.

This event is free and open to the public. Sponsored by Emerson College and the Public Art Think Tank.