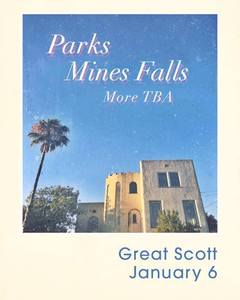 Due to the predicted inclement weather, this show is being postponed until Saturday Jan. 6 and Photocomfort will unfortunately not be able to play anymore.

Parks:
Boston five-piece Parks did not ride the facile road toward its emergence, encountering one setback after another in putting together its self-titled debut album. They're here now though and here's to perseverance. Their first single, "Sweater Weather," released in earlier this year, won the John Lennon Songwriting Competition and inspired folks like the Lumineers and Tennis to ask them to share their stages. Under the Radar has the video premiere of their next single and lead track from the forthcoming album.