Panel Discussion on In Search of Stonewall 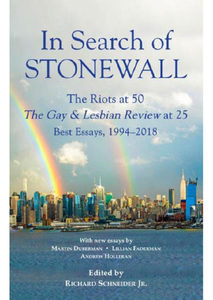 In collaboration with the Boston Public Library and the Boston Pride Committee the Boston-based Gay and Lesbian Review will host a Stonewall 50-themed panel discussion during Boston Pride week. The Review began publishing as the Harvard Gay and Lesbian Review in 1994, the year of Stonewall 25. It changed its name in 2000 as it went “worldwide.” The magazine marks its 25th anniversary amidst Stonewall 50 with a collection of its best all-time essays on the Stonewall Riots: In Search of Stonewall.

The panel will feature LGBTQ intellectuals who contributed to the anthology. In his preface Dr. Schneider notes that “because “Stonewall’ exists as a symbol of the LGBT movement quite apart from the historic event itself, the search is always on for the meaning of Stonewall …. [S]omething happened, and it happened quite rapidly and even magically after the riots, so in this sense the search for Stonewall can also be a desire to reconnect with the overpowering energy and excitement of the period.”

Participating in the Review panel discussion will be writers Amy Hoffman and Russ Lopez and historian Martha Stone. Dr. Schneider will moderate. Each will analyze the significance of Stonewall from his or her perspective.