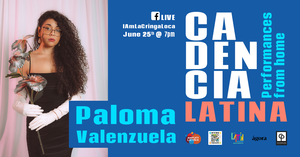 On June 25th at 7pm, Paloma Valenzuela will be performing a monologue on Facebook Live. Valenzuela is an award winning Dominican-American writer, director, and actress from Boston. She studied writing for film and television at Emerson College and from there went on to create her own production operation named La Gringa Loca Productions. Since 2010, La Gringa Loca has produced various plays, short films, documentaries, commercials, a comedic web series, promotional videos, among many others. The Comedic Web series, “The Pineapple Diaries” is an award winning series that has been widely recognized and shown at various film festivals. Additionally, Valenzuela hosts workshops for monologue writing in the Boston area and was awarded as one of the Isabella Stewart Gardner Museum Creative Luminaries of 2018-2019. Tune in on La Gringa Loca Productions’ Facebook Page and enjoy this amazing performance from the safety of your home.

Check out the full calendar of events, Thursdays and Sundays at 7pm ET (except 6/28)!

While we have your attention ;) : Let’s make sure Latinxs are seen and heard every day. Take the opportunity to visit https://2020census.gov/ and fill out the Census. Latinxs make up an undercounted group, which puts us at a disadvantage that could mean less funding and political voice.

Amplify Latinx is a non-partisan, collaborative movement whose mission is to build Latinx economic and political power by significantly increasing Latinx civic engagement and representation in leadership positions across sectors.

Hyde Square Task Force's mission is to amplify the power, creativity, and voices of youth, connecting them to Afro-Latin culture and heritage so they can create a diverse, vibrant Latin Quarter and build a just, equitable Boston. HSTF is the managing partner of Boston's Latin Quarter which is a culturally, racially, and economically diverse cultural district located in Boston's Jamaica Plain neighborhood that aims to preserve and uplift its rich Afro-Latin history and culture.

Cojuelos' Productions is a Consulting Agency that celebrates all artistic expression through creative and innovative, diverse and culturally oriented programming and curated experiences.

Ágora Cultural Architects is a boutique production and consulting firm committed to Latinx arts and communication.