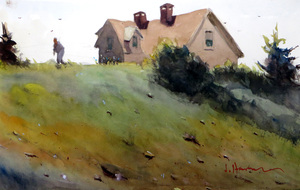 There will be three upcoming art events in the month of August. Three artists will perform painting demonstrations and art talks.

The current exhibit titled Monhegan Mystique is on display until August 31, 2017. This is a unique show of paintings of a local traveling group of artists who went to Monhegan Island in Maine last June. These four artists are Bill Cloutman, Frank Costantino, Jack Haran and Jack Hobbs. Monhegan is a small rocky island, ten miles from the nearest mainland in Maine, and scarcely a square mile in area. It is accessible only by boat and there are no cars or paved roads on the Island. The year-round population hasn’t exceeded 65 in recent years. For more than 100 years, Monhegan has been a summer haven for artists and other visitors who appreciate its isolation, the beauty of its wilderness areas, its quiet relaxed atmosphere, and its unhurried pace.

On Saturday, August 12, from 3 to 5pm, Jack Haran will discuss the beauty and complexities of watercolor and then paint a demonstration of a Monhegan scene.

On Sunday, August 20, from 3 to 5pm, Frank Costantino will replicate his painting called Uphill Dory II in watercolor and explain how & why he went about the composition, his palette choices for the colors, and the various methods of washes that comprise the work. This demo piece may also be for sale.

About the Artists:
Bill Cloutman, a Swampscott resident, studied art at Vesper George School Of Art in Boston, under Robert Douglas Hunter and Don Stone who have been the most influential of the people he has studied under for fine arts. Upon graduation he went into the U.S. Navy as a photographer on an aircraft carrier. After discharge he returned to Boston to pursue a career in commercial art as an art director and creative director. In 1991 he rekindled his friendship and scholastic relationship with Robert Hunter to study painting. With his help plein-air oils have become his focus. His works have been represented by several Massachusetts galleries, and has won numerous awards.
Frank Costantino, a Winthrop resident, has been an architectural illustrator for 45 years and has always been fascinated and inspired by the exquisite, painterly images of his predecessors using the time-honored medium of watercolor. He derives the most satisfaction from painting en plein air - that is outdoors, on location and in one sitting. He has obtained signature status with both the New England and North East Watercolor Societies, and elected membership in the Salmagundi Club of New York. He also sustains memberships in and regularly exhibits work at a number of local galleries & art associations, as well as selected galleries in the Northeast.

Jack Haran, a Duxbury resident, is an award winning artist, he is the past president of the New England Watercolor Society and past president of North River Arts Society. He has exhibited in a number of solo, group and juried shows over the last 25 years. These shows have included local, regional, national and international exhibits. He has given numerous watercolor demonstrations and taught watercolor classes. Jack is also a skilled draughtsman and has received numerous awards for his works in charcoal.
Jack Hobbs, a Hingham resident and the owner of South Street Gallery, paints locally every day. Growing up in the Ohio River Valley, he developed a sensitivity toward the landscape of the surrounding farmlands. These landscape impressions have remained with him and have become the primary influence and focus of his work. Also, living abroad and studying in Rome, Italy, provided a foundation for his obsession with the fine art of painting.

About South Street Gallery
South Street Gallery is committed to the advancement of both developing artists and those with established reputations. For over fifteen years, this gallery has supported the arts and the community, and has been home to a number of shows by prominent plein-air artists. The Gallery offers many opportunities to meet and learn from artists who display. Many Gallery artists engage in the plein-air tradition of painting - a blend of a unique combination of fresh color, accurate values, and real life based compositions.
South Street Gallery is located at 149 South Street in Hingham. Hours are from Tuesday to Saturday, 10 am to 6 pm and Sunday, 12 to 5pm. For additional information please call 781-749-0430 or visit www.southstreetgallery.com.