Opera at the Cinema: Anna Bolena 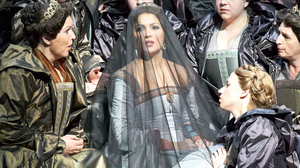 Gaetano Donizetti was one of the dominant figures of the operatic world in the second quarter of the nineteenth century. He wrote at astonishing speed, composing some seventy operas in his lifetime. Anna Bolena premiered to great acclaim in Milan in 1830, which also saw the retirement of Rossini. With the death of his compatriot, Bellini, only five years later, it fell to Donizetti to pick up the mantle of leading the ‘bel canto’ style of which all three were major exponents.

Henry VIII’s second wife has become one of the most iconic of all female characters whether in film or on the stage. It is no surprise that some of the world’s greatest sopranos, including Maria Callas, Montserrat Caballé, Joan Sutherland and Edita Gruberova, have portrayed her. Donizetti’s opera begins with Henry already having decided to rid himself of his Queen so that he can marry his new lover, Jane Seymour. We sympathise with Donizetti’s Boleyn; it is the King’s treachery in welcoming Lord Percy, the Queen’s first husband, back to the court and out of exile which seals her fate.

One of Donizetti’s great skills was his ability to sustain the melodic line of his music, demanding bravura performances from his singers, no more so than in the duet between Anne Boleyn and Jane Seymour, Sul suo capo aggravi un Dio, in which the Queen’s lady-in-waiting reveals that it is she who has betrayed her. By making audiences hold back from punctuating each scene with their applause, Donizetti’s compositional style lends itself quite brilliantly to ensuring that the tension demanded by the story builds uninterrupted to the final climactic scene.

If you can't stretch your dollar to fly abroad, then join us for the next best thing with these virtual opera house experiences.

28/04/2019 10:00:00 28/04/2019 13:00:00 15 Opera at the Cinema: Anna Bolena Presented by the Wiener Staatsoper. Starring Anna Netrebko. Gaetano Donizetti was one of the dominant figures of the operatic world in the second quarter of the nineteenth century. He wrote at a... The Coolidge Corner Theatre, Brookline, MA 02446 Organizer Organizer e-mail false DD/MM/YYYY Reddit