One Time Weekend with Joon and Leon Trout 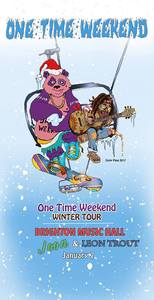 Once upon a time, in a mystical town on the Farmington River, four strapping young men plugged in, picked up their sticks, and ripped a jam so earth-shaking and tasty, the locals still talk about it to this day. All they needed was a name.

One Time Weekend is an up-and-coming band from Connecticut. After forming their groove in Collinsville, members Ben Sullivan, Ian D’Arcangelo, Adam Eytan, and Zac Mulcahy combined their talent to create a fresh youthful vibe influenced by artists both past and present. The newly formed group has written many original songs that feature their funky, jazzy, rock, soul, rap, and reggae tastes while adding complexity to the mix, creating their own unique sound, and breaking down the mold of modern contemporary music.