One Night Live: A Telethon for the Restaurant Strong Fund 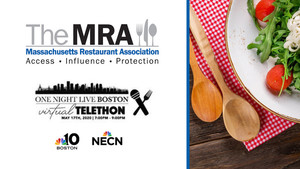 The Massachusetts Restaurant Association, in association with NBC10 Boston and NECN, will be presenting “One Night Live,” a live streaming telethon on Sunday, May 17, from 7 to 9 p.m. to benefit the Restaurant Strong Fund.

“As restaurants and their displaced workers continue to navigate the unique challenges placed in front of them, they have always been the first to step up to the plate when people are in need. ‘One Night Live,’ was created with these restaurants and their employees in-mind. In concert with NBC10 Boston and NECN, the Restaurant Strong Fund and several other amazing partners, we plan on making this an important night of both entertainment and giving back to an industry that touches each one of us,” said Bob Luz, president and CEO of the Massachusetts Restaurant Association.

Slated to perform are BMI recording artists, including Sam James from NBC’s the Voice, Grammy nominated songwriter and former American Idol judge Kara Dioguardi and Grammy award winning singer/songwriter Lori McKenna, just to name a few. In addition, viewers can expect a special one-time performance from The Dropkick Murphys, as well as nods from Boston musicians such as G. Love and many more!

From the world of sports and entertainment, you can look forward to appearances from comedian Tony V, former Boston Red Sox players Pedro Martínez and Jason Varitek, and Matthew Slater from the New England Patriots, with others joining the bill daily!

Hosted by Anna Rossi from NBC10 Boston’s The Hub Today, the goal of this event is to raise vital funds for the Restaurant Strong Fund, which is a collaboration between The Greg Hill Foundation and Samuel Adams to support those from the restaurant industry here in Massachusetts who have been impacted by the COVID-19 closures. The show will be streamed live on NBCBoston.com, NECN.com, and the NECN Facebook page and shared by over 1,500 restaurant streaming platforms across the state of Massachusetts and presents one of the largest opportunities in the country to help displaced workers.