One Mighty and Irresistible Tide 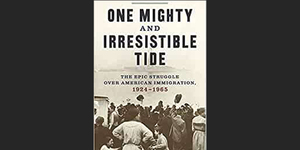 Please register for this Zoom webinar at https://bit.ly/3klqr09

The idea of the United States as a nation of immigrants is at the core of the American narrative. But in 1924, Congress instituted a system of ethnic quotas so stringent that it choked off large-scale immigration for decades, sharply curtailing arrivals from southern and eastern Europe and outright banning those from Asia.

One Mighty and Irresistible Tide recounts how lawmakers, activists, and presidents from FDR through LBJ worked relentlessly to abolish the 1924 law. Through a world war, a refugee crisis after the Holocaust, and a McCarthyist fever, a coalition of lawmakers and activists descended from Jewish, Irish, and Japanese immigrants fought to establish a new principle of equality in the American immigration system.

Their crowning achievement, the 1965 Immigration and Nationality Act, proved to be one of the most transformative laws in the country’s history, opening the door to nonwhite migration at levels never seen before—and changing America in ways that those who debated it could hardly have imagined.

Jia Lynn Yang is a deputy national editor at The New York Times. She was previously deputy national security editor at The Washington Post, where she was part of a team that won a Pulitzer Prize for coverage of Trump and Russia. Before becoming an editor, Jia Lynn wrote about business and economics at the Post and at Fortune magazine for over a decade. Jia Lynn's family immigrated to the United States from Taiwan in the 1970s and was able to stay in the country thanks to the 1965 Immigration and Nationality Act. One Mighty and Irresistible Tide is her effort to understand the people who fought to give her family a place in America.


Free and open to the public
Sponsored by the Inter-University Committee on International Migration
For more information or accessibility accommodations please contact lkerwin@mit.edu.