One Hundred Years of Modern Dance "The Early Moderns 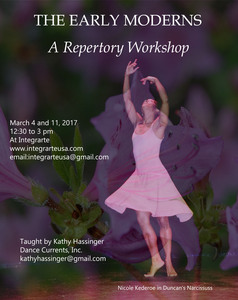 What: One Hundred Years of Modern Dance (The Early Moderns)

Cost: $30/session or $50 for both. Register online at Mindbody or in-person at INTEGRARTE.

After a brief warm-up you will be learning the repertory of the following famous Modern Dance Choreographers.

A dance of the Greek god, Narcissus, discovering his reflection in the water. Kathy Hassinger learned this from Patricia Adams,

“Dances by Isadora.” At this point, natural movements, that we do everyday became the vocabulary of a new dance language.

Incense was performed as the first piece in St. Denis’ programs to bless the performance space and honor the spiritual world.

This interpretation is staged by Kathy Hassinger from Jill Beck who used the Labanotation score.

Staged by Jill Beck and Kathy Hassinger from the Labanotation score.

Staged by Jill Beck and Kathy Hassinger from the Labanotation score.

These waltzes were created by Charles Weidman to honor his partner, Doris Humphrey. She felt that movement, like life, began from an off-balance start and continued into a series of falls, rebounds, rises, suspensions and falls again.

This interpretation is staged by Jill Beck and taught by Kathy Hassinger, after Lorry May (Sokolow Now!) and Jim May (The Sokolow Theater Dance Ensemble) from the Labanotation score. Sokolow was known for her intensely psychological dances in which she would reveal the inner lives and alienation of her characters.

Kathy Hassinger: is the Artistic Director of Dance Currents Inc. (www.dancecurrentsinc.com). She was head of the Dance Department at Newton Country Day School for seventeen years (1990-2007), and recently retired from Emerson College after teaching Dance History for eight years (2008-20016). Hassinger produces historical modern dances in a program titled One Hundred Years of Modern Dance, and is working on a movie entitled Living the Legacy of Modern Dance.