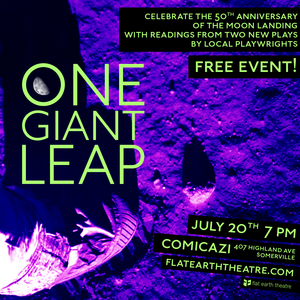 Inspired by the 50th anniversary of the historic moon landing on July 20th, 1969, Flat Earth Theatre is commissioning two new plays that explore our relationship with our nearest celestial neighbor, and ponder our next steps towards worlds beyond. Company members A. Lehrmitt (Lovecraft's Tales Outside Time & Space, Lovecraft's Unnamable Tales) and Kevin Mullins (A Southern Victory, Citizens of the Empire) take on the stellar task of navigating the moon and its society, both as a radio play and an onstage production. The project launches on Saturday, July 20th, 2019 with readings from the plays at Comicazi, with full readings to take place in the Spring.

Fine-Tuned Universe: a radio play
By A. Lehrmitt

Stationed on the far side of the moon, a team of SETI scientists works to repair a malfunctioning radio telescope seeking signs of life beyond the solar system. Closer to home, life may be in danger when Earth suddenly goes silent, and the crew of Arroway Station begins to question if they can trust the dubious information fed to them from the opposite side of the moon. Don’t believe everything you hear; in this new radio play you must learn to find the signal amongst the static.

Amanda Croswell is an executive for a leading helium mining company, stationed to the first human city on the moon. Her wife Jane is a high-ranking diplomat with the United Nations. To the outside world they have the perfect life. But when Jane is exposed as a spy for the Chinese government and defects to Beijing, Amanda's perfect world falls apart. Alone, in space, and miles from home, Amanda must piece together her past, finding what is real and what is not, all while a conflict between two superpowers lingers on the horizon.