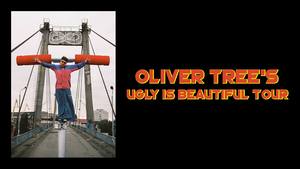 Los Angeles-based genre-defying singer/songwriter/producer + viral sensation, Oliver Tree, has made waves with his unique high-energy sound and eccentric persona. Tree's critically acclaimed debut EP Alien Boy, impressive debut at #5 on iTunes.
The EP’s lead singles, “Alien Boy” x “All That” are accompanied by a hilarious companion video where Oliver can be seen cruising around on everything from a Razor scooter to a monster truck. Watch the video here.

Last year, Tree joined close friend and collaborator, Whethan, on select dates of The Chainsmokers’ “Memories” Tour and also teamed up with Louis The Child on select dates of their 2017 tour, including a sold-out show at Los Angeles’ famed Hollywood Palladium. This tour was just the next on the ever-growing list of live shows for Oliver Tree since making his festival debut this past summer with solo sets at Lollapalooza and Outside Lands.

Having made a striking debut with a visionary, Thom Yorke-approved cover of Radiohead’s “Karma Police,” Tree soon shook up the music scene with featured collaborations including Whethan vs. Oliver Tree’s “When I’m Down” and Getter’s “Forget It (Feat. Oliver Tree).” Tree lit up last year’s Coachella with his distinctive look – featured in LA Weekly’s “The Best (And Weirdest) Fashion At Coachella 2017” – and memorable live appearance alongside frequent collaborator Whethan. In addition, Tree recently made his network television debut by joining Getter for a live rendition of “Forget It” on NBC’s Last Call with Carson Daly.

Huffington Post has applauded his work as “an enigma of genre. While (Tree is) primarily a pianist, guitarist and producer, his real-instruments-based-production incorporates rap, male and female vocal harmonies, poetic lyrics, strings and a hearty dose of synth...as much philosopher as musician, and a big dreamer at that, (Tree’s) goal is to push the art form forward, and beyond the electronic scene, he aims to have his work reach the world and in doing so, better his listeners’ lives,” while NYLON encourages everybody to “get weird to the sweet, sweet sounds of Oliver Tree.”