Old T-shirts to New Quilts; Create your own with Project Repat 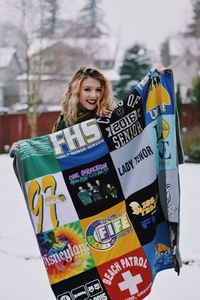 You know those 10, 20, 30 t-shirts in your drawers that you just can't seem to part with? Your first 5k, your last half marathon, a family reunion, a college football game .... bachelorette parties, trade shows ... it goes on.

Enter the t-shirt memory quilt from Project Repat. Come in to visit with this local company who's made it their mission to help you preserve memories while simultaneously de-cluttering your closet.

They will be selling a $50 starter kit ($75 value) to get you on the right track. You'll then go home, organize your t-shirts according to the instructions and redeem online. You can drop your t-shirts off at For Now by 1/28, ship them to Project Repat, or drive them to their location in Newton.

In 4-6 weeks, you'll get your old t-shirts back, in a much more useful form.

**We'll also be doing a giveaway for two gift boxes worth $75 each.

About Project Repat
When Ross Lohr was working in Nairobi, he noticed a man wearing a t-shirt that said, "I danced my ass off at Josh's Bar mitzvah 1997." Why was this man wearing a 20 year old t-shirt from half-way across the world? How many t-shirts were out there in the world? When he returned to the states, he teamed up with Nathan Rothstein to start making t-shirt tote bags to try to make a dent at all the t-shirts sitting in people's closets, but they quickly learned that what people apparently wanted was an affordable t-shirt quilt. Since the summer of 2012, Project Repat (repatriating textile jobs back to the US) has created over 200,000 custom t-shirt quilts for customers around the country. Over 60 people in former textile hubs make the quilts everyday and last year alone, Repat up-cycled over 5 million t-shirts.