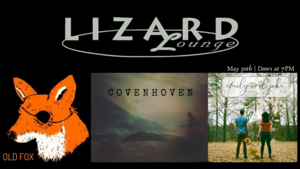 Formed in Somerville, MA, the founding members, Alex and Ralph, decided to build the band and its music around the phrase, honest words for honest people. The band has since evolved with that goal in mind, and has continued to focus on creating simple, vulnerable, and evocative music for anyone who decides to listen. Their first single titled, I Hope the Children Have Your Hairline, was released on March 1st, 2019. The band sold out their EP release show within two hours of its announcement. A second show was added to the same date to accommodate demand, also selling out just days after its announcement.

Colorado native Joel Van Horne, aka Covenhoven, has dubbed his new critically acclaimed album the ocean record, because he wrote the songs while touring and exploring the west coast over the past 2 years. Chapter 3 in the Covenhoven story, A Kind of Revelation continues his over-arching theme of immersion in a place, and letting that place become the centerpiece of the music. Big Sur, Olympic National Park, and the Oregon coast served as his geographical muse this time around. The resulting 9 songs are a captivating journey that transport the listener to the remote corners of the windswept coastal wildernesses from which they were born.

Formed between Boston and Portland ME, Emily and Jake create gracefully warm music with effortless harmonizing, easy melodicism, and raw honesty. "Beautifully simple and understated" - For the Love of Bands. Emily and Jake spin a harmonic story that nourishes the dark intimate workings of the anxious mind in their first project St. Augustine. Their songs seek sweet simplicity and candor in both melody and lyrics. Their melancholy songwriting juxtaposes the lighthearted arrangement present in their album creating the perfect balance between wistful regret and rosy promise.