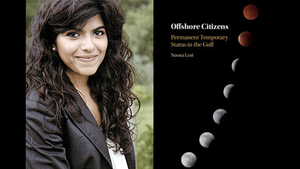 Please register for this Zoom webinar at http://bit.ly/OffshoreCitizens

When it comes to extending citizenship to certain groups, why might ruling elites say neither 'yes' nor 'no', but 'wait'? The dominant theories of citizenship tend to recognize clear distinctions between citizens and aliens; either one has citizenship or one does not. This book shows that not all populations are fully included or expelled by a state; they can be suspended in limbo - residing in a territory for protracted periods without accruing citizenship rights. This in-depth case study of the United Arab Emirates uses new archival sources and extensive interviews to show how temporary residency can be transformed into a permanent legal status, through visa renewals and the postponement of naturalization cases. In the UAE, temporary residency was also codified into a formal citizenship status through the outsourcing of passports from the Union of Comoros, allowing elites to effectively reclassify minorities into foreign residents.

Noora Lori is an Assistant Professor of International Relations at the Pardee School of Global Studies, Boston University. Her book, Offshore Citizens: Permanent “Temporary” Status in the Gulf (Cambridge University Press 2019) received the best book prize from the Migration and Citizenship section of the American Political Science Association (2020). She has published in the International Journal of Middle East Studies (forthcoming), Perspectives on Politics (forthcoming), Journal of Global Security Studies, Oxford Handbook on Citizenship, the Asian and Pacific Migration Journal, the Journal of Politics & Society among other journals. Her work has been funded by the ACLS/Mellon foundation, Ziet-Stiftung Ebelin und Gerd Bucerius, the Hariri Institute for Computing and Computer Engineering (BU), the Initiative on Cities (BU) (2016; 2019), as well as other grants. She is the Founding Director of the Pardee School Initiative on Forced Migration and Human Trafficking, which she co-directs with Professor Kaija Schilde. At BU, she received the Gitner Family Prize for Faculty Excellence (2014) and the CAS Templeton Award for Excellence in Student Advising (2015). She was previously an Academy Scholar at the Harvard Academy for International and Area Studies, a fellow at the International Security Program of the Harvard Kennedy School, and a visiting scholar at the Dubai School of Government. She received her PhD in Political Science from Johns Hopkins University’s (2013) and her dissertation received the Best Dissertation Award from the Migration and Citizenship Section of the American Political Science Association in 2014.

Free and open to the public
Sponsored by the Inter-University Committee on International Migration
For more information or accessibility accommodations please contact lkerwin@mit.edu.