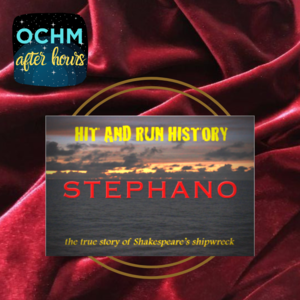 OCHM After Hours: Screening of Stephano: The True Story of Shakespeare's Shipwreck with Hit and Run History

Join us for a screening and Q&A with the filmmaker! The one-hour film Stephano: The True Story of Shakespeare's Shipwreck follows the story of the only Mayflower passenger who had been to North America previously. A decade earlier, Stephen Hopkins had been aboard a Jamestown-bound ship that wrecked on Bermuda, inspiring Shakespeare's final play, The Tempest. Shot on location, the intrepid Hit and Run History crew retraces Hopkins’ life crisscrossing the Atlantic. Two-time Emmy-nominated producer and host Andrew Giles Buckley, a Hopkins descendant, grew up hearing stories that New Plymouth’s iconoclast tavern keeper may have the model of The Tempest’s drunken and mutinous Stephano. In their Gumshoe Historian style, Buckley and crew of Hit and Run History seek out the reality of a man who was everywhere at the founding of America.