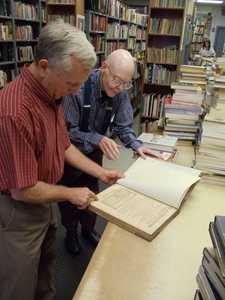 Ken will talk about and show some of his favorite finds and describe some of the joys of the "hunt," as well as explain what makes a book go up in value. He has many fascinating anecdotes to share as well as guidelines for what to look for when starting a collection. There is also a Q&A session before the conclusion of his talk. Following the talk and question-and-answer session, Ken will give free verbal appraisals of books participants have on hand or will do so at his shop in Boston at a later scheduled date.

Yankee Magazine Editor's Choice Award for Best of New England, the Brattle Book Shop is one of America’s oldest and largest antiquarian bookstores. 2020 is the 71st year of Gloss family ownership. Kenneth Gloss succeeded his late father, George Gloss, a well-known figure both in Boston and national antiquarian circles. He had worked in the store since childhood and chose to go into the book business rather than pursue a doctorate in chemistry. He became the sole proprietor upon his father's death in 1985. "I found that books were in my blood and that I would never be really happy if I abandoned the business."