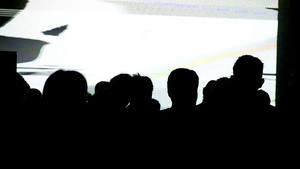 Become a Non-Event member now until Dec 7 and get in free (along with the usual membership benefits)!

APATHY AND STEEL is the techno project of Mark Cetilia. Mark is a sound / media artist working at the nexus of analog and digital technologies. Exploring the possibilities of generative systems in art, design, and sound practice, Cetilia’s work is an exercise in carefully controlled chaos.

BASTIAN VOID is the solo project of Joseph Bastardo, a graphic artist and musician from Worcester. He plays in the groups Looks Realistic, Gay Shapes, and LAN. His pieces are assembled with analog/digital synthesis and found-sound manipulation. Recent performances are based on improvisations with a modular synthesizer.

DONALD SHAW (formerly Offal) is a composer and performer currently based in Providence, Rhode Island. He studied jazz at the New School and was a member of Fat Worm of Error.

JESSE KENAS COLLINS works with brass and woodwind instruments as well as simple systems of analog feedback. Working and living in Boston since 2008, Jesse Kenas Collins collaborates in various ad hoc groupings of improvisers in and around town. His solo works are funneled into small editions of recordings and occasional live performances.

WENDY EISENBERG is an improviser and composer who performs primarily on guitar, banjo, voice and electronics. Wendy Eisenberg's work is about the ways that visual and sociological space inform the musical signs of time and frequency. Her compositions and instrumental technique are developed from her involvement with the traditions of free jazz, punk, heavy metal, avant-garde composition and art songs.

FORBES GRAHAM is a trumpet player, electronic musician, composer, and visual artist living and working in Boston, Massachusetts. He has worked with a diverse array of musicians and currently is a member of Para Quintet, Rock Flint Contemporary Ensemble, Wild May, Grizzler, Construction Party, and Equal Time. He is the founder of the Rock Flint Artists Retreat, and has appeared at numerous festivals including High Zero, Full Force, and Vision.

WENHUA SHI is a media artist and filmmaker, who pursues a poetic approach to moving image making, and investigates conceptual depth in film, video, interactive installations and sound sculptures.

DAMON SMITH studied double bass with Lisle Ellis and has had lessons with Bertram Turezky, Joëlle Leandré, John Lindberg, Mark Dresser and others. Damon Smith's explorations into the sonic palette of the double bass have resulted in a personal, flexible improvisational language based in the American jazz avant-garde movement and European non-idiomatic free improvisation.