No Honeymoon for Biden— Unite Against the Fascists! 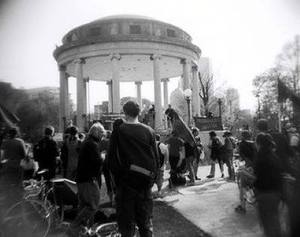 Inaugurating an Agenda for Working People— Defending ourselves against right wing attacks.

Participants are expected to wear a face covering and stay 6 feet apart.

The coronavirus has taken a devastating toll on so many of us who have done so much to keep this country running. While we have been dying, Wall Street has been soaring and the fascists have attempted a coup! The police in Washington, DC handled these people very gently when compared to those who protest police murder and systemic inequality. Allowing the far right to seize the Capitol building clearly illustrates that the sympathies of the police lie with the fascists.

Back in late March, Wall Street received a bailout to the tune of a potential 6 trillion dollars while working people received a pittance in comparison. For millions, the bailout ran out months ago. Through this sheer compulsion, millions have been forced to work in hazardous conditions where they become ill and the horrendous death toll continues, well over 370,000 and counting. Who is doing most of the dying? The elderly, healthcare workers, workers where we shop, the working poor, parents of infected children, prisoners. In the existing racist society, folks from oppressed nationalities are dying in disproportionate numbers while police brutality is rampant. Deportations will continue and migrant camps will remain. Wall Street was bailed out with tax cuts and big fat stimulus checks and we were thrown under the bus.

In this context, people voted in record numbers against the political virus— Donald Trump. However, the defeat of Teflon Don does not represent a mandate for the incoming Biden/Harris regime. Our choice was between a catastrophic disaster and a potentially manageable catastrophe. We can do better! Biden is tied to the 1994 crime bill, migrant camps, killer drones, etc. Harris has a record as a prosecutor of jailing folks from oppressed nationalities. The war on the poor will continue and the Democrats will call for patience and reconciliation. They will tell us we have to wait in line. Enough! Isn’t it about time that we take matters into our own hands? Mass organization and mobilization is the only language these people understand. It is the only language equipped to confront the new regime in the period ahead. It is how we achieve empowerment. Maybe you feel alienated and didn’t vote. We can make a difference if we get organized and take action.
This is how working people have been empowered in the past and we can do it again. The attacks will continue until we stop them. This is how we can defeat Trumpism. They will try to implement Trumpism without Trump. As a basis for defending our lives, rights, and communities, we are putting forward the following demands:

1) We demand an immediate bailout of working people and the oppressed, not the wealthy elites. More cash payments to working people. Restore all previous unemployment benefits from the state and federal governments! Stop all evictions and foreclosures. Free education for all.

2) We demand that the Federal Government immediately provide universal free healthcare for all who reside in the US, regardless of immigration status. Federal, state, and local governments must treat the opioid crisis as a healthcare issue— not a law enforcement issue.

3) We demand immediate hazard pay for all workers currently working outside of their homes in order to compensate for the sacrifices they are making. No liability protections for employers who endanger the health and safety of workers. Workers should not have to work if they feel their health and safety are endangered. All those quarantined must get sick pay.

4) We demand an end to police brutality. Black lives matter! We demand that cops committing extrajudicial murder of African Americans and others be held fully accountable.

5) We demand that all undocumented residents have immediate access to driver’s licenses and be granted immediate legal permanent resident status. Immediate citizenship for all youth in the DACA program and for all those with TPS (Temporary Protected Status). Halt deportations and release detainees. Close the camps. Reunite the families!

6) We demand a massive public works program at union scale wages to construct universal guaranteed housing, hospitals, daycare, and other services for all residing in the US.

7) We demand the closing of the hundreds of military bases all over the world so that the war budget can be used to provide for our needs here at home. All the wars must end! We demand an end to the blockades of Venezuela, Cuba, Iran, and N. Korea.

8) Climate change is an existential crisis. We demand that the Federal Government fund a massive program to produce mass transportation, energy conservation systems, ecologically sustainable agriculture, and convert the economy to renewable energy sources to drastically reduce the production of greenhouse gases.

9) We demand the immediate restoration of affirmative action and other programs providing reparations for the institutionalized racism in this country.

11) We demand more initiatives to address the problems faced by Transgender people. End the attacks against transgender folks now!

12) We demand the cancellation of all student, medical, and credit card debt!

For a world where human needs are put before profits. A world without borders, prisons, police, ICE, structural racism, poverty, homelessness, xenophobia, sexism, homophobia, ageism, …… For workers democratic control over production, distribution, our lives, and communities. We must form mutual aid organizations to look after each other, as Washington, state, and local governments are certainly not doing that.