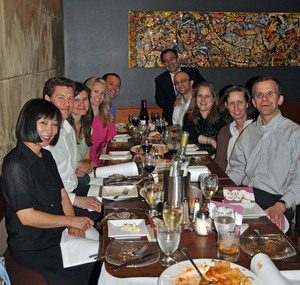 On April 5, NF Northeast (Neurofibromatosis Northeast) will celebrate the NF community and its supporters with their 18th annual Table for TEN charitable dining event in Boston. With honorary co-chairpersons Dan Andelman, host of myTV38’s “Phantom Gourmet,” and Donato Frattaroli, Jr., proprietor of il Molo restaurant in the North End, headlining this unrivaled evening, supporters will dine at some of the city’s top restaurants before closing out their night at a decadent dessert reception with live entertainment and an auction hosted at the newly renovated University of Massachusetts Club (One Beacon Street, Boston). Frattaroli is the second generation in his family to serve as honorary co-chair of the event, with his father, Donato Frattaroli, Sr., having held the title in 2011.

Groups of ten guests will arrive at their respective restaurant at 6:00pm on Wednesday, April 5, and will indulge in a specially created three-course menu paired with wine. This year, NF Northeast has joined forces with some of the best restaurants throughout the city to make their biggest splash yet. Participating restaurants in this year’s Table for TEN event include, but are not limited to: Artu; Da Vinci Ristorante; Darryl’s Corner Bar & Kitchen; Davio’s Northern Italian Steakhouse; il Molo; La Motta’s; Legal Sea Foods (Park Square); Lucca (Back Bay & North End); Ocean Prime; Parker’s Restaurant; Post 390; Scampo; Serafina; State Street Provisions; Strega Waterfront; The Smoke Shop; The Tip Tap Room; Top of the Hub; Tresca; and, Union Oyster House.

At 8:00pm, supporters are invited to continue the festivities at the official after-party at the University of Massachusetts Club. At this dessert reception, Montilio’s Baking Company will provide sweet treats and revelers will enjoy music entertainment by Ancient Mysteries featuring Kevin McKelvey and Ben Buttrick. Additionally, there are raffles, a silent auction and a live auction with honorary co-chairperson, Dan Andelman, serving as guest auctioneer.

Neurofibromatosis (NF) is a prevalent genetic disorder of the nervous system that causes tumors to form on the nerves anywhere in or on the body at any time. Proceeds from Table for TEN will fund scientific research at the Center for Human Genetic Research at Massachusetts General Hospital as well as provide support to the NF clinics at Boston Children’s Hospital and Massachusetts General Hospital. Research will help find the cure for NF, a genetic disorder that can cause learning disabilities, seizures, brain tumors, deafness, vision impairment and cancer. Additionally Table for TEN will help to create awareness about NF which affects more people than cystic fibrosis and muscular dystrophy combined, yet is a little known disorder. Over the years, incredible strides in research development have been made bringing us one step closer to a cure.

For more information on the Table for TEN event and to reserve online, please visit: www.nfincne.org. Tables for ten are available beginning at $1,000 and individual tickets at a table may be reserved for $100 per person. Sponsorships are also available by contacting NF Northeast’s Diana Flahive at 781.272.9936 or dflahive@nfincne.org.