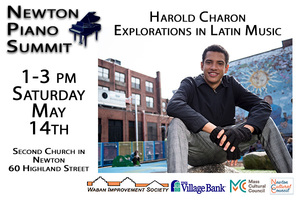 One of the things we try to do with the Summit is feature talent before they get Grammys, world attention, and command fees well above our current budgets, and yes this has happened! We poll past summit artists regularly to see who’s the new hot talent on the scene and this time Harold Charon’s name kept coming up.

Harold Charon is the youngest headliner we have featured on the Summit, only slightly younger than Jimin Park a few years ago. Originally from Havana, he began piano lessons at 5 years old. Exuding musicianship decades beyond his years, he went on a Canadian tour which included the Halifax Jazz Festival and received training from Fred Hersh, Taylor Eigsty, Billy Childs and the late great jazz master Chick Corea.

Crossing genres, Harold has worked with a variety of artists including Leo Vera, La Cruzada, and Los Clasicos. In 2016 he joined Janio Abreu and Aire D’ Concierto, where he worked as a pianist and composer for Ruy Lopez-Nussa y La Academia. Currently, he is finishing his studies at Berklee, majoring in jazz composition and performance. His music features influences from Latin, Salsa, Jazz and Timba. Timba is a Cuban genre of music based on Cuban son with salsa, American funk/R&B, and the strong influence of Afro-Cuban folkloric music. Chucho Valdez, bandleader of Irakere is considered one of the founders of the style. He’s bringing some amazing talent with him including Trumpeter Richard Stanmeyer who also studies at Berklee on a grant from the college’s Presidential Scholarship Committee. His teachers include Tia Fuller, Marquis Hill, Jason Palmer, Charlie Lewis, and Jeff Stout among others. He performs regularly around town at Wally’s Jazz Café, the House of Blues, the Middle East, PAX East, and The Lilypad. Ernan D. Ramos Ortiz “Ed Rox” – Congas and Cajon – is a multi-instrumentalist, rapper, composer, and producer who is strongly influenced by the rich musical culture of Puerto Rico and his upbringing in a family of musicians. “For me, music is the only way that your soul can speak itself.” Michael Doughty is a bassist from North Andover, MA. and recently was the bassist for Berklee’s Signature Series concert featuring Afro-Cuban artist, Daymé Arocena. Cristián Tamblay is a Chilean drummer who performs and records with a wide variety of global artists.

Reddit
14/05/2022 13:00:00 14/05/2022 15:00:00 America/New_York Newton Piano Summit - Harold Charon - Explorations in Latin Music One of the things we try to do with the Summit is feature talent before they get Grammys, world attention, and command fees well above our current budgets, and yes this has happened! We poll past s... Second Church in Newton, West Newton, Massachusetts 02465 false DD/MM/YYYY