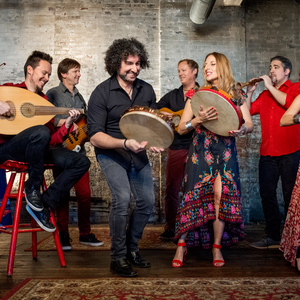 Newpoli’s Carmen Marsico, Angela Rossi and Fabio Pirozzolo grew up hearing the ornaments and songs in their corner of southern Italy, Campania and Basilicata: The ballads and women’s songs vibrating with intricate ornaments, the voices raised at church or in kitchens to the thrum of the tamburello. Yet over time, they and their musical kindred spirits in the Boston-based band began to hear other things, the microtonal and rhythmic moments that hinted at a wider musical world.

From bare field recordings to passionately arranged traditional and original pieces, Newpoli traces and expands these sounds on Mediterraneo (release: October 4, 2018). Chants, pizzicas and tarantellas (the latter performed to counteract the stultifying effects of spider bites) cross paths with new songs and tunes and instruments, insisting we bond more closely with both neighbors and the newcomers in our midst.

The wider geographic resonances of very regional traditions mirrors the fates of the people who moved around the Mediterranean, from North Africa and Greece to Italy and the Levant. These movements live on in today’s struggles and crises, as people seek new homes in the face of conflict and chaos, coming to southern Italy for refuge or fleeing the region in hopes of economic stability.

These stories move Newpoli and have helped forge the band’s sound, which they like to call “Mediterranean Pulse” / “Ritmi della terra.” “We’re not a strictly traditional band by any stretch of the imagination. If it sounds right, we’ll add a fretless bass or a guitar banjo to a song,” says Marsico. “That said, we compose originals while looking at the traditional style. This music has spoken to us, and we want our music to speak to our contemporaries about the present with that same strength.”

Newpoli keep the music living and breathing by letting different elements cross pollinate, accidentally and on purpose. “At first, we focused solely on the music of southern Italy but as we continued, we wanted to look at certain influences, the notes and rhythms, and where they came from,” explains main Newpoli composer and multi-instrumentalist Bjӧrn Wennås. “We started looking at the migration patterns, politically and historically, and wanted to shine a light on these origins, which ranged from North Africa to Turkey. We started to look at new instrumentation and learn other musical languages and put that into new music.”

Sometimes, the group is inspired by a sparse traditional song that reveals unexpected hints of far-flung Mediterranean sounds, like “Iere Sera.” Marsico was listening carefully to this chant from Puglia, one that featured the vocal techniques common in her home region. Their microtonal qualities inspired Marsico and Wennås to layer the traditional piece with a North African rhythm, transforming the song into something fresh.

This fresh approach is not innovation for its own or for mere art’s sake. Newpoli feels this music can speak firmly to the present crisis unfolding across the sea, from Italy and Greece to North Africa and Turkey. “The blend of cultures has always been present in the music,” says Wennås. “On Mediterraneo", we really seized on that.” For the album’s title track, “I was listening to some Greek bouzouki music and trying to play along on my chittara battente [Italian guitar]. I failed miserably but came up with this interesting melody that became the hook for the title track,” Wennås laughs. “I was sitting on that hook for almost a year until we booked a studio date and I started to feel the pressure.”

Marsico and Rossi worked out some timely lyrics, told from the perspective of migrants struggling to cross the sea to safety, and the song came together. The lyrics sprang from Marsico and Rossi reading first-hand accounts of migrants’ harrowing voyages and varied experiences in their new homes. “We didn’t want to speak about it from our perspective but let their words come through,” says Marsico.”There was darkness but also light in those accounts. We not only wanted to describe the tragedy that these people go through but we also wanted to show that it is possible to build a new life and be accepted in another country.”

Though Newpoli strives to uncover new colors and ancient migrations in well-loved songs, they never stray too far from their core love of southern Italy’s musical riches. Originals may rise from small encounters, like the heartwrenching conversation Rossi and Marsico overheard walking down the street in a village in Basilicata, which became “Lagr’m’.”

Others are enriched with traditional Italian elements, overlaid onto rare field recordings (the swinging “Me Ne Vogghje Scenni ‘n Fintanella”) or woven into new, more pop-inspired songs. Back in Italy for a trip, Rossi picked up a guitar one calm day and began fiddling around with chord progressions. This relaxed jamming turned into a bold statement, “‘Na Voce Sola,” encouraging listeners to become the change they long to see in their community and the world, thanks to moving lyrics and an infusion of Campania’s rollicking tammurriata rhythm.

That folk sounds could serve new pieces so well comes as no surprise. These songs brought a moment of lightness or a stretch of solace into the hard lives of rural people. They have powerful ways of addressing and illuminating today’s struggles over migration and the meaning of community. “With this album, we looked at the Mediterranean as a force to unite people, instead of separating people,” reflects Rossi. “We are all struggling with individualism, fighting to save our own privileges, our own self, but how can we also work with others? We need to look at this as humans. It’s a difficult problem, but we can’t turn away.”