Newcomers: Gentrification and its Discontents 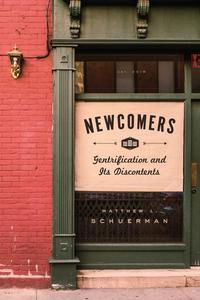 Newcomers is an even-handed journalistic account of gentrification from the 1950s to the present that combines intimate accounts of developers, community organizers, and public officials with detailed explorations of policy decisions. Gentrification, Schuerman argues, is not primarily a cause of urban ills, but a symptom of something larger: the transition from a manufacturing economy to an information-based one. Real estate developers and marketers were quick to take advantage of the phenomenon, while local and national leaders failed to treat it seriously—even when a handful of activists attempted to warn the nation as far back as the 1970s of the dangers of “reinvestment.” Newcomers reinvigorates the debate over urban change with objectivity, grace, and wit. It will leave readers with a deeper appreciation of the roots of gentrification, the misunderstandings that have accompanied its rise, and the urgency needed to address residential displacement today.

Matthew L. Schuerman was born and raised in Chicago and has spent most of his life in cities since then. His coverage of urban issues has appeared in The New York Times, The New York Observer, and The Village Voice, as well as on NPR’s “Morning Edition” and “All Things Considered.” He is currently a senior editor at WNYC public radio in New York, where his projects have won numerous honors, including a prestigious Edward R. Murrow Award. He is a magna cum laude graduate of Harvard College and received a master’s degree from the Medill School of Journalism at Northwestern University. Newcomers is his first book.

13/11/2019 19:00:00 13/11/2019 20:30:00 15 Newcomers: Gentrification and its Discontents About the Book Newcomers is an even-handed journalistic account of gentrification from the 1950s to the present that combines intimate accounts of developers, community organizers, and public of... Trident Booksellers and Cafe, Boston, MA 02115 Organizer Organizer e-mail false DD/MM/YYYY Reddit