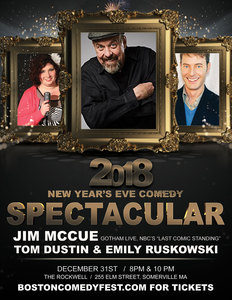 Bring in the New Year in with Laughter. Comedian Jim McCue will headline this yearly tradition of comedy with great comedians and the perfect venue to enjoy New Year's Eve.

With Special appearances by Tom Dustin

In his first year doing stand-up, Tom Dustin won the Sam Adams Comedy Contest, beating out more than 50 comics and since then, he's toured the nation, working with comedians like Nick Dipaolo, Jim Norton, Dave Attell, Doug Stanhope, and Jim Breuer. Onstage, Tom's unmatched likeability allows him to push comedy to its limit without fear. Offstage, he's a mean, self-hating manic-depressive who unsuccessfully tries to be a good person up to two days per week.

Emily Ruskowski has been performing stand up comedy for the past six years, first in the Washington D.C. area, and more recently, in and around Boston. She was featured in the Washington Post’s Going Out Guide and has opened for Gilbert Gottfried and Maria Bamford.