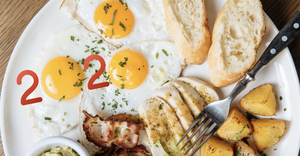 30 places to brunch around Boston on New Year’s Day...

A la Carte Menu & Live Music at Capo
Where: Capo | Southie
What: Recover from your New Year's Eve festivities at Capo. Swing by the beloved Southie hang for a la carte brunch and then head down to the Supper Club for a special acoustic performance by Dalton & the Sheriffs.

Dim Sum Brunch at Myers+Chang
Where: Myers+Chang | South End
What: Joanne Chang's funky South End spot has just what you want in 2020: Dim Sum Brunch. Begin your year with a bang and do something a bit different than your standard eggs & pancakes.

New Year's Day: Brunch
Where: Club Cafe | Back Bay
What: For only $19.50, you’ll get all the delicious brunch you can eat plus special Broadway hump day entertainment with Brian Patton.

Coppersmith New Year’s Day Hydration Brunch
Where: Coppersmith | Southie
What: Come in and cure your post New Year’s Eve hangover with a brunch at Coppersmith. I.V. League will be setting up hydration stations and the regular brunch menu will be served.

Fat Hen Brunch Pop-up
Where: La Brasa | Somerville
What: Get your New Year's Day Fat Hen fixe at La Brasa. The side-by-side sister restaurants are collaborating on a first-of-the year brunch pop-up so you can enjoy a menu of a la carte goodies from the Fat Hen repertoire in the homey-chic dining room at La Brasa.

Hang Over Brunch & Opinionation
Where: Sixth Gear - Cask & Kitchen | Southie
What: Hangover brunch menu begins at 5pm and will be served all night, opinionation game begins at 8pm.

A la Carte Brunch at Alcove
Where: Alcove | North Station
What: Recover from your night out on the town with a robust brunch at Alcove. Specials on the a la carte menu include decadent goodies like lobster & eggs with caviar add-ons as well as a trio of New Year's Day donuts.

New Year's Day Hangover Brunch
Where: Anthem Kitchen & Bar | Faneuil Hall
What: Make the first meal of the year a good one with Anthem’s fan-favorite new year's day brunch. Brunch specials as well as the full menu will be offered.

New Year's Day Brunch at Lincoln Tavern
Where: Lincoln Tavern | Southie
What: Come kick off the New Year at Lincoln on January 1st. Recover from your celebrations with food, drink specials, and tunes by DJ Lay-Z-Boy.

No Regrets New Year's Day Brunch at Banners Kitchen & Tap
Where: Banners Kitchen & Tap | North Station
What: There's no need to look back with regrets on the decade, year (or night) before, instead start 2020 off by continuing the celebration at Banners "No Regrets" Brunch featuring a live DJ, fun photo booth moments and a few menu specials that might look familiar.

New Year's Brunch at the Everett Taproom
Where: Night Shift Brewing | Everett & North Station
What: The struggle is real on the day after NYE. Night Shift Brewing got your back with bountiful brunch and beer cocktails. Enjoy brunch from Night Shift Eats, reality TV streaming all day long, Mario Kart, and drinks.

New Year's Day: The Diet Starts Next Year!
Where: City Tap House | Seaport
What: J & S acoustic will be in the house from 12-4pm while you treat yourself to snacks that would horrify your trainer.

A la Carte Brunch at Burro Bar
Where: Burro Bar | Brookline
What: If you've got a hankering for Mexican cuisine to start the new year, swing by the Washington Square outpost of Burro Bar. They'll be open for brunch serving their a la carte menu along with an array of margaritas and, of course, 100+ different types of tequilas.

New Year's Day Brunch at CBC
Where: Cambridge Brewing Company | Kendall
What: On New Year’s Day, you have two options: lots of coffee or more beer. CBC will have both and a few new brunch specials crafted by Chef Dave.

New Year's Day: Magnum PI Brunch
Where: Bar Mezzana | South End
What: Bar Mezzana is breaking out the Hawaiian shirts and mustaches yet again, and are easing into the New Year Magnum PI-style. In addition to tiki cocktails and decadent brunch specials, a number of magnums will be available to keep the celebration going.

Pajama Brunch
Where: Local 149 | Southie
What: January 1st may be the beginning of the new year, but it's also National Hangover Day. Grab some hair of the dog at our Pajama Brunch on New Year's Day.

Black Lamb NYD Brunch
Where: Black Lamb | Back Bay
What: Celebrate the New Year at Black Lamb. Standard brunch menu along with caviar and $1 oysters will be served.

Osechi Ryori Popup Brunch
Where: Momi Nonmi | Inman Square
What: Osechi Ryori (御節料理) are the traditional foods enjoyed on New Year’s day in Japan. They come in an assortment of colorful dishes packed together in special boxes called jubako, which resemble bento boxes. Every dish of these traditional foods have special meaning in welcoming the New Year. There will be 2 types of bento to choose from.

New Year's Day Brunch at Back Bay Social
Where: Back Bay Social | Back Bay
What: The first hangover of the year calls for a little hair of the dog. Wednesday brunch doesn't come around often, but when it does you better enjoy it.

New Year's Day Brunch at Cafeteria Boston
Where: Cafeteria | Back Bay
What: Join Cafeteria on Newbury Street for brunch with a vibe on New Year’s Day.