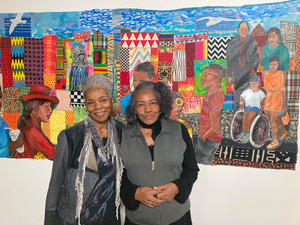 Pairing celebrated Black muralists with artists is the focus of Now + There’s year-long, critically-acclaimed project, “Mentoring Murals,” with notable artists Johnetta Tinker and Susan Thompson and their new installation, “Deeply Rooted in the NeighborHOOD, homage to Allan Rohan Crite.” The artists’ temporary, printed mural is mounted at 345 Blue Hill Avenue in the Grove Hall neighborhood between Roxbury and Dorchester and will be on display from Dec. 10 to Feb. 10, 2022. An opening event is planned for Dec. 11 from 12 p.m. to 2 p.m.

Longtime friends and first-time collaborators, Tinker and Thompson created a celebration of how Grove Hall communities gather and enjoy each other year-round with their work. “Deeply Rooted in the NeiborHOOD, homage to Allan Rohan Crite” depicts the vibrancy of Blue Hill Avenue past and present and all four seasons of activity in the neighborhood. Together, the artists blended collage, quilting, and painting techniques in this bright tribute to daily life in Roxbury, Dorchester, Jamaica Plain, and Mattapan. It’s the third and final installation in the Mentoring Murals series.

Tinker and Thompson were mentored by Crite (1910-2007), a well-known Boston-based African American artist committed to creating images of African American life based on his lived experiences instead of stereotypes. Known as the “biographer of urban African-American life in Boston,” he nurtured a generation of Black artists, known as “The Boston Collective” to depict their daily lives, as well as Black narratives, as a way to claim space and broaden cultural representation. With this suite of murals, the artists pay tribute to Crite's dedication to uplifting everyday life in Black Boston and bring to life a collaboration that has been 40 years in the making.

“We wanted to show the different seasons and how families enjoy themselves,” says Tinker. “The background is really a patchwork quilt and to see the figures on it really brought it alive,” added Thompson.

“Mentoring Murals” is a program by Now + There, a nonprofit organization bringing temporary, site-specific public art to all neighborhoods of Boston, in collaboration with Greater Grove Hall Main Streets (GGHMS) and support from Breeze’s Laundromat LLC. Within walking distance to several other important Grove Hall murals, the 13’ x 60’ wall is part Breeze’s, an anchor community business. The changing imagery and a mobile tour of all Grove Hall murals available at www.nowandthere.org/tour. Mentoring Murals is generously supported by Boston Main Streets Foundation, the Kensington Investment Company and a New England Foundation for the Arts Collective Imagination for Spatial Justice grant.

"The creative energy in this partnership is palpable," said Leah Triplett Harrington, Now + There's Curator, who invited artists' participation. "I've long admired Tinker and Thompson's work, and with this direct reference to their mentor Crite, "Deeply Rooted in the NeighborHOOD" brings us full circle to the birth of Boston scene painting, the impetus for Boston's Mural Movement. N+T is thrilled to present this work and bring more life-affirming art experiences to all corners of Boston."

Murals--bringing diverse representations of Black life and culture--have popped up across Dorchester in recent years. These artworks emerge atop the foundation of African American scene painting from the 1930s and 40s. From the 1960s to today, local artists such as Dana Chandler, Napoleon Jones-Henderson, Sharon Dunn, and others have registered the neighborhood’s significance as a center of Black culture. During the Black Arts Movement of the 1960s and 70s, the neighborhood’s walls became the fulcrum of powerful murals, starting a tradition that continues to this day. Notable examples include “Africa is the Beginning,” by Gary Rickson (1969), Dana Chandler’s “Knowledge is Power” (c. 1973), “Faces of Dudley” by Mike Womble (1995, reprised 2015), “Roxbury Love,” by Ricardo “Deme5” Gomez and Thomas “Kwest” Burns (2016-2020), and “Breathe Life 3” by Rob “Problak” Gibbs (2019) for Now + There. The wall at 345 Blue Hill Ave is catty-corner from Gibbs’s first in the “Breathe Life” series.

When Ed Gaskin came to Grove Hall, he said there was only one work of public art listed by the Boston Arts Commission. “Learning of the relationship between public art and economic development, and the challenges artists of color have in getting the opportunity to display their work, we set out to change that,” said Gaskin, GGHMS’s Executive Director. “Murals were one way to bring more public art to the community.” He said they are grateful for financial support from the Boston Main Streets Foundation and Now + There so “art infrastructure will be in place for us to display the best established and emerging artists from a range of styles, at a much lower cost.”