New Kids on the Block vs. New Edition | A Boston Benefit 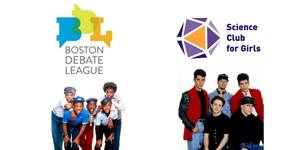 Jesse Mermell and Ayanna Pressley's friendship has been plagued by a disagreement over which 90's Boston boy band is better, and they’re resolving things in the only way possible: a community event supporting Boston Debate League and Science Club for Girls. Dig your old band t-shirts out of storage and practice your old school dance moves, because you won’t want to miss Ayanna, Jesse, and a DJ with a long New Edition / New Kids on the Block playlist settling this score.

Hosted in partnership with Dudley Cafe. Proceeds benefit The Boston Debate League and Science Club for Girls. All ages welcome.

Proceeds will be split evenly between Science Club for Girls (#TeamNKOTB) and Boston Debate League (#TeamNE).

ABOUT BOSTON DEBATE LEAGUE | TEAM NEW EDITION
To integrate argumentation and competitive debate into Boston Public Schools to develop critical thinkers ready for college, career, and engagement with the world around them.

Youth with great talent, creativity, and potential often go unchallenged and unrecognized. When the classroom doesn’t engage them, in some cases students respond by dropping out, behaving disruptively, or giving up on themselves. Consequently, too many grow up without the skills they need to succeed in college and compete in today’s economy.

Competitive academic debate offers a powerful means of engaging students in their own education and can help to reverse negative trends. Debaters come from across the academic spectrum, including those who do not attend school regularly or are not thriving in the traditional classroom.

Debate appeals to these students as a fun, competitive, and student-centered way to encounter academic subjects. For many, debate tournaments are a rare opportunity to connect intellectually with their peers and to have their ideas about important issues considered seriously by adults.

ABOUT SCIENCE CLUB FOR GIRLS | TEAM NKOTB
Since its founding in 1994, Science Club for Girls (SCFG) has provided the very best in girls-specific programming by connecting girls in K-12 grades, especially those from underrepresented groups, with female mentor-scientists through free science, technology, engineering and math (STEM) programs in a fun, nurturing, interactive environment. Our club-based model fosters both scientific thinking and sisterhood for our youngest participants. Our teen leadership programs give girls the opportunity to be role models, teach young children science, learn life skills, conduct science research in applied settings, and explore careers in science and technology.

As of the 2015-16 program year, approximately 1,200 girls participate in SCFG programs in 18+ sites across five communities in eastern Massachusetts (Boston, Cambridge, Lawrence, Newton, and Brookline). 80% of SCFG participants come from racial or socio-economic backgrounds that are underrepresented in STEM fields.

With 80% of the fastest growing jobs in the next decade requiring capabilities in science, technology, engineering and mathematics, our efforts to increase interest and promote career awareness in these fields are essential to ensure equity and access for underrepresented girls and their communities. Out-of-school-time programs like Science Club for Girls are incredibly important to narrowing the achievement gap and to assuring the long-term economic competitiveness for the state and the country.

For more information, please reach out to Nai Collymore-Henry at nai@ayannapressley.com.

*** Please note that this is a feel good celebration of New Kids on the Block and New Edition. Band members will not be present, but will be missed. ***