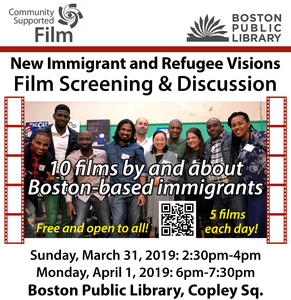 Celebrate the premiere of ten documentary films by and about immigrants and refugees with the New Immigrant and Refugee Visions (NIRV) filmmakers on March 31 (Films 1-5) and April 1 (Films 6-10) at the Boston Public Library.

Boston-based Community Supported Film (CSFilm) selected and trained 10 immigrants from 10 different countries of origin to produce 10 short documentary films on their fellow new immigrants and refugees. The films were made to stimulate dialogue among audiences from diverse backgrounds and perspectives.

Five films will be screened at each event, followed by an open facilitate conversation among the audience, filmmakers and film subjects about the issues raised by the films, including:

Audience members will receive resources for exploring these issues in greater depth and suggestions for how they can use these films to stimulate dialogue in their own communities.