New England Philharmonic presents 'A Child of Our Time' 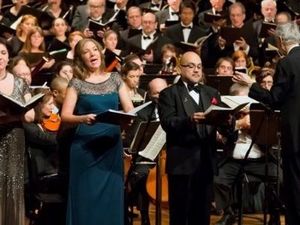 The New England Philharmonic, under the direction of Richard Pittman, will present Michael Tippett’s “A Child of Our Time” to celebrate their 40th anniversary on March 4 at 8 p.m. at the Tsai Performance Center. The nine-time ASCAP award-winning orchestra will also celebrate the 20th season under Maestro Richard Pittman’s direction.

For the Tippett work, the NEP will be joined by Chorus pro Musica (who performed the piece alongside the NEP when they last performed it in 1992) and noted soloists Sarah Pelletier, soprano; Krista River, mezzo-soprano; Charles Blandy, tenor; and Sumner Thompson, bass. The concert will also feature the world premiere of former NEP Composer-in-Residence Richard Cornell’s “Melospiza melodia” and Gunther Schuller’s “Vertige d’Eros.” Cornell’s piece has been gifted to the NEP in honor of the orchestra’s anniversary.

“‘A Child of Our Time’ was inspired by developments in Nazi Germany in the late 1930's and was a protest against oppression everywhere in the world. It is a beautiful, moving work,” said Pittman. “It's uncanny how similar the events in the world are today and how relevant this work is to our time. Gunther Schuller's beautiful ‘Vertige d’Eros’ was written one year after the world premiere of Tippett’s work and is an example of another significant composer living in the same world.”