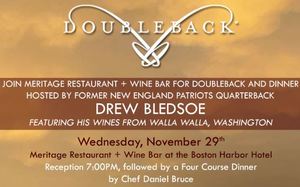 Chef Daniel Bruce and the team at Boston Harbor Hotel are thrilled to welcome former New England Patriots Quarterback Drew Bledsoe to Meritage Restaurant + Wine Bar at the Boston Harbor Hotel for a reception and four-course dinner on Wednesday, November 29.

Former NFL quarterback Drew Bledsoe will bring select wines from Doubleback, his family-owned vineyard on the outskirts of the Walla Walla Valley, to be sampled and enjoyed at the picturesque Meritage Restaurant + Wine Bar. After returning to his home state in 2007, Bledsoe collaborated with childhood friends and established winemakers to create a premium wine experience with a focus on world-class cabernet sauvignon.

Bledsoe’s distinguished wines will accompany a reception and beautiful four-course dinner by renowned Chef Daniel Bruce. Tickets are available for $225/person via Eventbrite.

The full menu for the evening is as follows: