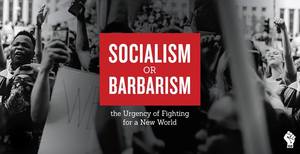 At the root of the crimes and outrages of this era are the priorities of a capitalist system controlled by a small elite of the wealthiest and most powerful people.

There are struggles for change in many different corners of society, each with their own histories and dynamics. But waging them most effectively requires an understanding of how they are connected and dependent on each other--and how, together, they can contribute to a broader struggle to change the rules of the game for good.

We need to build a left-wing resistance that doesn't let the right go unopposed. We need to protest the reactionaries wherever they appear, and not go along with the liberal advice to ignore them and they will go away--because they won't. We need to claim the right of free speech for ourselves to make our opposition heard.

But we need something else as well: a left that puts forward a political alternative to the right's scapegoating and hate. This is the case for joining the struggle for socialism today. The disasters of capitalism are as numerous and obvious as they have ever been--and so is the need to do something now to achieve a socialist future.

The New England Marxism Conference will draw together hundreds of socialists and activists from Massachusetts, Maine, Vermont, and throughout New England for workshops on Marxist theory, history and practice - and discussions about how to use those politics to build an urgently needed socialist movement today.