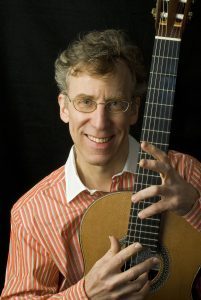 Two full days of workshops, classes, and concerts focus on the guitar as an ensemble instrument. This year, we are particularly excited to announce the premiere of a new commission by one of the most significant American composers today: Robert Beaser.

Robert Beaser has emerged as one of the most accomplished creative musicians of his generation. Since 1982, when the New York Times wrote that he possessed a “lyrical gift comparable to that of the late Samuel Barber,” his music has won Robert Beaserinternational acclaim for its balance between dramatic sweep and architectural clarity. The Baltimore Sun writes “Beaser is one of this country’s huge composing talents, with a gift for vocal writing that is perhaps unequaled.” His opera The Food of Love, with a libretto by Terrence McNally, is part of the Central Park trilogy, which opened to worldwide critical accolades at Glimmerglass and New York City Opera. Televised nationally on PBS Great Performances, it received an Emmy nomination in 2000.

Guitarist Eliot Fisk is known worldwide as a charismatic performer famed for hisEliot Fisk adventurous and virtuosic repertoire. He is also celebrated for his willingness to take art music into unusual venues (schools, senior centers, and even logging camps and prisons!). After nearly 50 years before the public he remains as his mentor Andres Segovia once wrote, “at the top line of our artistic world.”

Described by one New York Times headline as a “Fiery Missionary to the Unconverted”, Eliot Fisk is Professor at the Universität Mozarteum in Salzburg, Austria, where he teaches in 5 languages, and in Boston at the New England Conservatory where in 2010 he received the Krasner Award as “Teacher of the Year.”